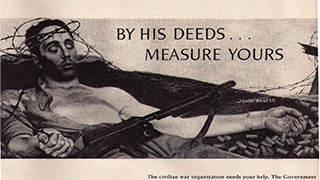 "Images of death and destruction have long been wielded to harness support for war and the impact of battlefield photography is indisputable," said James J. Kimble, associate professor of communication & the arts at Seton Hall University. "From Matthew Brady's Civil War images that spurred a nation at war with itself to horror, to the most recent images emerging from Syria of chemical attacks that seemed to have spurred the President of the United States to action he long said he would not take — images have the power to move people. In World War II the U.S. government harnessed that power to move a nation forward in war; to do so, it carefully set the table so those graphic and disturbing photographs could work."

In his article, "Spectral Soldiers: Domestic Propaganda, Visual Culture, and Images of Death on the World War II Home Front," published in Rhetoric & Public Affairs, Professor Kimble questions the popular and "accepted" historical narrative that the government suddenly changed its public depictions of the war to feature graphic and disturbing imagery of dead and injured soldiers.

Kimble writes that the existing "narrative suggests that there was a singular, definitive turning point between the innocent images of the war's early years and the gory depictions at its climax. The turning point allegedly occurred early in the in the fall of 1943 as a result of the government's growing concern that Allied successes on the war's various battlefronts were fostering a sense of civilian complacency on the home front. Up to that point, newsreels, posters, and media photographs had uniformly spared American viewers the awful reality of seeing their own war dead, a trend made official by government and military censorship standards."

The "turning point" image in question here is an iconic photograph by George Strock of three dead Marines washed up on Buna Beach in New Guinea; the picture was part of a trove of previously censored military photographs stored in what was referred to as "The Chamber of Horrors."

President Franklin Delano Roosevelt is said to have released a number of these photos in an effort to inspire and energize the public's war efforts. The haunting image of the three dead Marines on the beach was published in Life magazine on September 20, 1943; in the weeks and months to follow other publications followed suit, essentially bombarding the public with stark and increasingly gruesome war images until the cessation of hostilities a few years later.

Professor Kimble acknowledges that the publication of the Strock photo in the fall of 1943 did mark a turn in the visual imagery propounded for public consumption, but effectively argues that the road for that turn had been well prepared by a number of other visual campaigns produced by the U.S. government prior to the photo's release, especially the images that appeared as part of the "Every Civilian a Fighter" campaign — a national advertising effort that was the result of collaboration among the Office of Civilian Defense, the War Advertising Council and the Magazine Publishers of America.

Kimble argues that these images, drawn not photographed, but still using images of death to engage civilians in the war effort, paved the way and created the visual space necessary for the subsequent photographs, constructing "a rhetorical space for graphic images of American battlefield death, a space that was exploited by the government with increasingly stark appeals throughout the remainder of the war."

This article is not Professor Kimble's first foray into the shattering of WWII era visual iconography and its accompanying narrative. Last year his research debunking the supposed identity of "Rosie the Riveter" in the famed "We Can Do It!" poster was featured by media across the world, including People magazine, NPR and the Travel Channel's "Mysteries at the Museum."