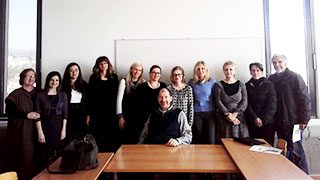 Associate professor of Communication & the Arts, Dr. James J. Kimble is one of three Fulbright Scholar grant recipients awarded to teach in Croatia as part of an international exchange program that brought an equal number of professors from that country to the U.S. Kimble is teaching two undergraduate courses in persuasion and oral communication, and co-teaching a graduate course in media culture. Classes began in late February and will run through the exam period, which ends on July 15. Thus far, it has been a tremendous learning experience for this professor as well as his students.

“There is no such thing as communication and / or the arts Croatia.” States Dr. Kimble. “In my classes, since public speaking isn’t a strong emphasis in this culture, I hope that I can teach my students to value it and want to get better at it. I have had conversations with the department chair about working to keep the curriculum of my Persuasive Speaking class going after I leave in July. That indicates to me that they can see the value of this kind of class and would like to offer it to future students.”

Kimble is nothing short of impressed—and astounded— at the level of ability of his students. He observes, “They are not only able to follow my idiomatic English, but know a lot of linguistic theory that our own students haven’t been exposed to before they reach Comm. Theory.” A significant proportion of the Croatian population speak at least some English, and many are near fluent. He feels slightly embarrassed that so many Americans know only one language, when as many as five to seven languages are spoken by some people in the country. “I can’t imagine giving a speech in a second or third language, but these students seem confident about the prospect,” he notes.

The choice to teach in Croatia was based primarily on the people, but also on its authentic Mediterranean outlook and climate, while being very European. It is also not a huge tourist hub, which allowed for more meaningful absorption into the culture.

Yet, for Dr. Kimble, while adapting to a different culture has been extremely rewarding and interesting—it has tested his limits in some ways. According to Croatian law, faculty meetings must take place in Croatian, even though in his present department (the Department of English), they would have no problem conducting business in English. As a result, Kimble sat through the first meeting and studied the nonverbal interactions…and was pleased that he’d taken away at least some meaning from the hour! He is also struck by how much less contact time instructors tend to have with students in each class. His classes meet for 90 minutes, one day per week, for fourteen weeks; however, two of them meet on Thursdays, and a holiday and faculty day have cut those class meetings back to twelve in total. Still, while the contact time per class is smaller when compared to the American system, students in Croatian schools are expected to take significantly more classes each semester than their American counterparts. “In the end,” says Kimble, “the two systems find different ways for students to learn; both are successful models for pedagogy.”

The Fulbright Program is the flagship international educational exchange program sponsored by the U.S. Government. Its purpose is to increase mutual understanding between the people of the United States and those of other countries. “It’s a peace initiative in a way,” states Kimble. “Consider, for example, that although there have been tensions between Russia and the U.S. over the last few years, the Fulbright exchanges between the countries have been healthy. Those kinds of personal and interpersonal exchanges are, I think, invaluable to building dialogue and understanding.” When asked what he wished to leave with his colleagues and students after his departure, Dr. Kimble hopes that, aside from curricular matters, a positive impression of Seton Hall University and of the United States in general will be his legacy. “I do hope that more Seton Hall faculty look into this program. It can only help them grow as individuals, and their home departments will be the richer for the wealth of experience and diversity that they will bring back with them.”