'Rosie the Riveter' came to symbolize the millions of women who filled America's factories during World War II. The famous image came to be revered as a representation of female empowerment.

Professor James J. Kimble's research on "Rosie the Riveter" and the iconic WWII era poster, "We Can Do It!," was featured in People magazine and NPR/Inside Higher Ed's "Academic Minute" as well as other media outlets across the globe.

Kimble's research, which was published earlier this year in the journal Rhetoric and Public Affairs, is concerned with the identity of the figure in the famed poster and the cultural and media processes that came to misidentify her in popular culture. Professor Kimble debunked the commonly held and much celebrated belief that a Michigan woman, Geraldine Hoff Doyle, was the model for the poster.

Originally produced in 1943 by J. Howard Miller for the Westinghouse Corporation as part of the factory production effort during World War II, the "We Can Do It!" poster was mass reproduced in the 1980s and came to be a revered representation of female empowerment. 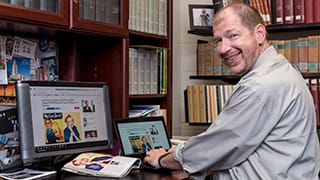 Through an exhaustive study over a period of years, Kimble traced the roots and history of Doyle's claim as well as its media portrayal. During his research, Kimble ultimately unearthed the original photo that is believed by many to be the basis for the poster and, importantly, was the key to Doyle's claim as the iconic poster's model.

The photograph Kimble discovered came complete with the original photographer's caption tag affixed to the back, which names Naomi Parker (-Fraley) in Alameda, California, as the subject of the photo - not Geraldine Hoff Doyle in Michigan.

'Rosie the Riveter,' the star of a government campaign aimed at recruiting female workers for the munitions industry, became the most iconic image of working women during World War II.

Parker-Fraley spent decades unaware of her connection to the poster, mostly because another woman named Geraldine Hoff Doyle, who worked in a factory in Michigan, had been labeled "the real-life Rosie the Riveter" since she believed she saw herself in an un-captioned reprint of Parker-Fraley's photo in the 1980s.

Because Hoff Doyle bore a striking resemblance to Parker-Fraley, no one questioned her claim, and her story traveled around the world.

Once Parker-Fraley learned her photo had been misidentified for almost 30 years, she tried to set the record straight by sending a newspaper clipping of her photo and its original caption to the park service. But it was too late. Hoff Doyle's place had already been cemented in history.

Her cause remained hopeless until 2015, when she met James J. Kimble, a professor of communications at Seton Hall University in New Jersey whose six-year quest to identify the woman in the photo had led him to straight to her door.

"She had been robbed of her part of history," Kimble says. "It's so hurtful to be misidentified like that. It's like the train has left the station and you're standing there and there's nothing you can do because you're 95 and no one listens to your story."

Kimble was eager to hear Parker-Fraley's story when he visited the Redding, California, home she shares with her sister in February 2015. Even better, he promised to do everything in his power to set the record straight.

The professor shared Parker-Fraley's story with the academic world in a 2016 article in the journal Rhetoric and Public Affairs and others soon took note. Now, Parker-Fraley, who was divorced once, widowed twice and spent most of her life working as a waitress, is ready for the spotlight.

"The women of this country these days need some icons," she says. "If they think I'm one, I'm happy about that."

Read the People magazine feature, " See Rosie the Riveter at 95: Woman Who Inspired WWII Poster Was Lost to History for 7 Decades"

My research shows a much more likely candidate for the poster's model is a woman who worked at the Alameda Naval Air Station in California in 1942. Her name is Naomi Parker. She is alive and well, but, painfully, forgotten to history.

At the center of this controversy is a press photograph, long thought to have inspired Miller's poster, of a woman in a polka-dot bandana, in a factory, working at a lathe. Doyle believed that she was the subject of the photograph, and her belief convinced many media sources and, eventually, an entire culture.

But my investigation into the poster unearthed an original copy of that photograph, and the attached caption clearly identified the woman at the lathe as Parker, in Alameda California, not Geraldine Hoff Doyle in Michigan.

There is a cautionary tale here worth heeding: In the age of the internet, stories often multiply and feed upon themselves, citing each other as sources, all distressingly void of independent research. And Doyle's story, because we now know it isn't true, can, and does, forensically, tell us a lot about modern media.

And what it says is frankly disturbing.

Listen to "Academic Minute," broadcast on NPR stations all across America, "Who Was the Real Rosie the Riveter?"

In addition, the story was featured by media outlets throughout the world, including Paraguay, Nicaragua, El Salvador, Peru, Indonesia, Poland and Israel.