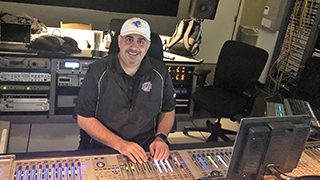 While the amount of knobs, buttons and inputs of an audio mixing board might seem daunting to some, Michael Del Tufo '93 feels right at home. Del Tufo, an alumnus of the College of Communication and the Arts, knows exactly how to navigate the intricacies of sound and keep creativity flowing in a professional studio.

Del Tufo, who loves all things sports, channels his passion for high-paced athletic games as an on-air sound mixer and talent for the Rich Eisen Show and various Fox shows including the Major League Baseball (MLB) on Fox, the National Football League (NFL) on Fox Kickoff Show and College Basketball. With over 25 years of audio mixing experience, Del Tufo has worked on 16 Super Bowl pregame shows since 1998– a bucket list item for many.

Originally from Livingston, New Jersey, Del Tufo balances his time in Los Angeles, California between checking music, monitoring sound playbacks and making sure the microphones are workings and ready. He has spent four years with the Emmy-nominated Rich Eisen Show, an engaging program that mixes football expertise with humor and pop culture.

"I get paid to do what I love every single day," said Del Tufo. "I am blessed to have been able to make a career in something that isn't just a job, but is fun to do – especially since I've been doing it since I was a young child."

Del Tufo has won multiple Emmy Awards in sports television production, and has been nominated for many others. A voting member of the National Academy of Television Arts and Sciences, he does what he loves every day, stemming from his love for production as a child when he would record his friends play football in grammar school or being a DJ at a local party. 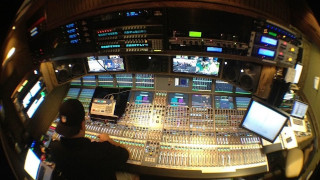 Growing up, Del Tufo enjoyed the creative side of production and was eager to video tape, take pictures and even DJ when needed. His expressive nature led him to the Communication major, an easy fit given his previous high school TV production experience and fondness of sports production. "I knew what I loved, and sound was a big part of my life with my DJ background," recalled Del Tufo. "But, working in the studio and working with my classmates was the best part since it brought those parts of me together."

Jumping at the opportunity to work outside of the classroom, Del Tufo joined WSOU 89.5 FM, working as the lead remote sports engineer. He traveled with the basketball team, supporting remote broadcasts of regular season games and the NCAA tournament. His experience with WSOU set the stage for his future work in Los Angeles and other travels around the world, he noted.

"When you're working on an event like the Super Bowl or mixing a live show, everyone is watching – 100 million people watch most Super Bowls," commented Del Tufo. "That's why always going the extra mile or putting in extra work when you're given the chance is so important. You don't know if that'll be the only chance you get, and I never take anything for granted."

With his 25-year career behind him, Del Tufo's enthusiasm for sound mixing follows through in his daily work. To help find their unique, professional drive, he encourages students to find their passion and take advantage of their classes and education. "Learn all aspects of your major. That way, if you're ever given an on-the-spot opportunity, you'll be prepared for it," said Del Tufo.

The author of this feature, Olivia Lason '17, is a Public Relations alumna from the College of Communication and the Arts, currently working toward an M.A. in Public Relations.