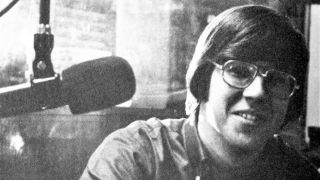 Bob Ley, one of the original ESPN SportsCenter anchors who enjoyed a forty-year career at the sports network before retiring last year, in the old WSOU studios at Seton Hall University. Ley started his broadcasting career at the campus radio station, where he did play-by-play of men's basketball games and was sports director. (Photo credit: Seton Hall University Archives)

An easily recognizable face and voice to millions of sports fans, iconic ESPN anchor, reporter, and Outside the Lines host Bob Ley learned his craft at Seton Hall University's WSOU 89.5 FM. WSOU will celebrate Ley's legendary career with a reception at the Prudential Center on Sunday, February 23, 2020 from noon-2 p.m. In addition to reminiscing with alumni and current students, Ley will reprise his role as a WSOU sportscaster during part of the Seton Hall vs. St. John's men's basketball broadcast on 89.5 FM Sunday afternoon.

"Bob speaks often about the critical role WSOU played in launching his career and through the decades he has taken the time to mentor and encourage generations of students who were following in his footsteps at WSOU," said general manager Mark Maben. "With Bob entering retirement, we felt it was important for the station to honor him for both his extraordinary career and all that he has done for the station and the campus community."

Ley's involvement with WSOU began in 1972. During his time at the student-run station, Ley served as sports director, program director and engineer, among other responsibilities. He did play-by-play and color commentary for numerous basketball and baseball games. A member of the class of 1976, his experiences at WSOU led to several broadcasting jobs in New York and New Jersey, as well as being the public address announcer for the New York Cosmos soccer team, before joining ESPN as a SportsCenter anchor in 1979. In June of last year, Ley announced his retirement from ESPN after a 40-year career with the network. Throughout his career, Ley regularly spoke with current students, presented workshops and master classes, and mentored several members of the WSOU sports staff. 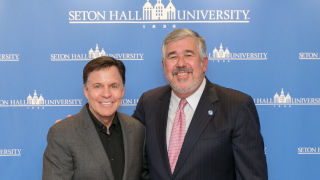 "I am extremely excited that Bob Ley will be joining Michael Daly and me on the air during the Pirates versus St. John's game," said Dalton Allison, the station's sports director. "It will not only be a treat for Pirate fans to hear Bob give his insights on the game, but also a great learning experience for Michael and me. To work side-by-side with such an iconic broadcaster is simply amazing."

The reception to honor Ley takes place from noon to 2 p.m. at Newark's Prudential Center. Ley can be heard on 89.5 FM during part of the second half of the men's basketball game against St. John's. In addition, Ley's career achievements and Seton Hall roots will be recognized during a pre-game on-court ceremony.

About WSOU
WSOU 89.5 FM, which began broadcasting in 1948, is the student-run radio station of Seton Hall University. Celebrated for its loud rock format and coverage of Seton Hall athletics, WSOU's signal reaches all five boroughs of New York City and much of northern and central New Jersey and is available on iHeartRadio. WSOU was the 2016 winner of the National Broadcasters Association's Marconi Award for Noncommercial Station of the Year and a 2019 nominee for the Marconi Award for Best College Radio Station. More information about the station can be found online at www.wsou.net and the WSOU Facebook page.