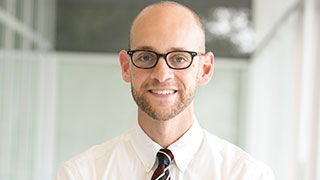 Professor Matthew Pressman's new book, On Press: The Liberal Values That Shaped the News (Harvard University Press), is set to be released on November 5. Already mentioned in the Washington Post by media columnist Margaret Sullivan, the book was also recently featured in Politico. Written by Jack Shafer, senior media writer for the website that averages 26 million unique visitors per month, the article in Politico is entitled: "The Surprising Reason the Right Doesn't Trust the News."

My prayers for a new way to think about the so-called crisis over "trust" in the press have been answered thanks to media scholar Matthew Pressman's erudite new history, On Press: The Liberal Values That Shaped the News. Journalism has changed measurably since the 1960s, he writes, and those changes have altered how we regard the news and why opinion surveys show that fewer and fewer people seem to trust it.

Although the book is Pressman's first, prior to coming to Seton Hall and the College of Communication and the Arts, he worked for eight years at Vanity Fair, where his articles about the news media won the 2010 Mirror Award for Best Commentary (digital media). He has also written for The Atlantic, the Washington Post and Time magazine.

Politico: "The Surprising Reason the Right Doesn't Trust the News"