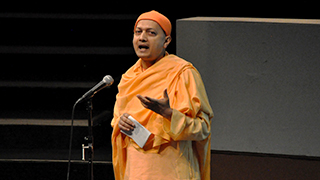 Swami Sarvapriyananda of the Vedanta Society of New York, the oldest Hindu organization in the United States, became the first Hindu dignitary to deliver a public lecture at Seton Hall University when he addressed a crowd of approximately 70 people gathered for the Institute for Communication and Religion's (ICR) "Religious Harmony: Community, Communication, Collaboration" event recently. And he came with a timely message for today's divisive times — all faiths are paths to God.

"We must love and respect the traditions of all religions," Sarvapriyananda said. "For me as a Hindu, to criticize or think of another religion — or the founders or the masters of another religion — as lower or inferior would be devastating for my own faith because what I'm criticizing is the same God I'm worshipping." 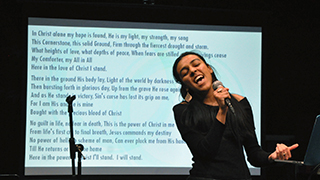 In this spirit of interfaith celebration, the ICR invited student and faculty devotees of several faiths to share chants and songs from their respective religions to kick off the gathering. Student Ishani Sanyal performed the "Krishna Bhajan" of Hinduism, student Karmen Yap recited "The Heart Sutra" from Buddhism, student Mohamed Elshekh shared two verses from the Qur'an of Islam and Angela Weisl, Ph.D., sang Judaism's "Shalom Rav" and "Shehecheyanu" with her friend Freddie Brooks. Student Josette Diaz — who was a contestant on season 11 of The Voice — closed out the performance segment with her rendition of the Christian song "In Christ Alone."

The ICR itself echoes Sarvapriyananda's perspective, having been founded in the spirit of the Nostra Aetate — the Catholic Church's doctrine calling for interfaith understanding and solidarity. Institute Director Jon Radwan, Ph.D., even pointed out that Sarvapriyananda's message — while not an exact reflection — closely mirrors the passage from the Nostra Aetate included in the ICR's mission. That text reads as follows:

"The Church, therefore, exhorts her sons, that through dialogue and collaboration with the followers of other religions, carried out with prudence and love and in witness to the Christian faith and life, they recognize, preserve and promote the good things, spiritual and moral, as well as the socio-cultural values found among these men."

Sarvapriyananda fittingly provided an iteration of the Nostra Aetate sentiment in his address, which explained three points from Hinduism's sacred Vedas. The first point was that there is only one truth, but it can be expressed in different ways. Hindus have Brahma, Muslims have Allah and Christians have Our Father in Heaven — but for Hindus they are all the same God and should be recognized as such.

The second point was that the purpose of religion and life is to become enlightened by realizing God. In other words, Sarvapriyananda explained, people must manifest the divinity within them through worship, meditation, work or love. The specific doctrines people follow within their religions are relatively minor details in comparison with devoting one's life to God.

Finally, Sarvapriyananda's third point tied the first two together by explaining that Hindus regard all religions as paths to God. They are different routes, but in the end their followers arrive at enlightenment. In Vedanta philosophy, it would be wrong to think that one faith is more accurate than another.

"An Android phone and an iPhone can give you different directions (to a location)," Sarvapriyananda said. "It does not mean one is correct and the other one's wrong. They are both valuable because they get you to the same point."

At the same time though, Sarvapriyananda pointed out that it is important to have dialogues with people of other faiths because that is how understanding can develop. Therefore, he appreciated getting the chance to speak about religious harmony for the ICR. And he is grateful that an organization like the Institute exists so that similar conversations can occur in the future.

"I think it's excellent," Sarvapriyananda said in an interview prior to the event. "It's really a worthwhile endeavor and something that the other universities across the land would do well to emulate." 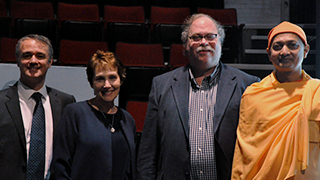 The ICR was just as excited to host Sarvapriyananda, especially as it looks to expand its focus beyond Christianity. Radwan said that the Institute's 2017-2018 launch year set a firm foundation with exclusively Catholic speakers, and now to advance the ICR's inter-religious mission in year two he wanted to host an event involving Hinduism because it is such a "fascinating" faith. He also knew Sarvapriyananda would be an ideal guest to talk about it after working with him on a conference panel and training for Seton Hall's Core Curriculum. Considering that the spiritual leader's speaking engagements often attract sold out crowds across the country, the Institute director acknowledged that it is an honor Sarvapriyananda accepted the University's invitation.

And his message of religious harmony was a lesson everyone should experience, Radwan added.

"Religious intolerance and fear are often caused by ignorance," Radwan said. "If we truly learn about each other's traditions, we can find commonalities that bind us together and build hope for the future."

Sarvapriyananda's speech was not the only event highlight, however. The occasion also featured a reflection from Rabbi Alan Brill, the Seton Hall Religion Department's Cooperman-Ross Endowed Professor of Jewish-Christian Studies in honor of Sister Rose Thering at Seton Hall, regarding the importance of comparing the "likes" of religions rather than focusing on their differences. The event then concluded with Sarvapriyananda and Brill responding to questions posed by audience members.

The audience certainly appreciated the chance to hear Sarvapriyananda speak. Pat Robinson, a practicing Hindu who traveled to the event from Maplewood with her husband Ted, said she tries to attend as many of the spiritual leader's lectures as possible at the Vedanta Society of New York. So when she learned he was appearing at Seton Hall, she knew she had to come.

She was not disappointed.

"He's masterful at handling questions," Robinson said, adding that she knew he would be adept at making the subject matter accessible based on his past lectures. "He's a wonderful, wonderful speaker on Sunday mornings. It is absolutely mobbed (whenever I see him)."

Arundhati Sanyal, Ph.D., a professor within the University's English Department, truly enjoyed the event for several reasons. First, Sanyal pointed out that the gathering's theme ties into the University's Core Curriculum, which prominently features the Nostra Aetate. Thus, the event was a chance for students to actively engage with Vatican II teachings in a real-world setting.

In addition to that, Sanyal stressed that religious harmony is extremely relevant considering today's geopolitical situation. People encounter so much vitriol in life and online, she said, and that is not going to change unless people communicate. But there are few opportunities for people to discuss their religious differences. Thus, Sanyal said it is important that the ICR continues holding events like this so that more "meaningful, creative" conversations can result and bridge the divide that has formed between people.

"No one necessarily is an island anymore," Sanyal, who aided the Institute in assembling the student and faculty performers for the event, said. "No one can speak without acknowledging the Other. So it is essential to know each other, to understand the perspective of each religion and ultimately to find common ground — to say 'I recognize what I’m hearing here from my tradition.' This is something that is essential in understanding each other." 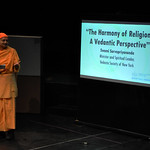 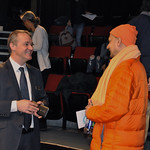 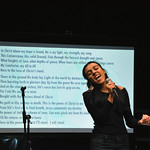 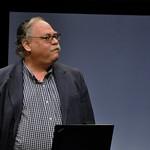 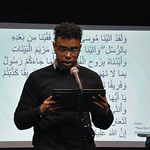 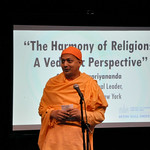 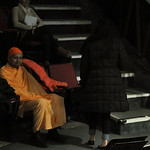 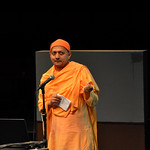 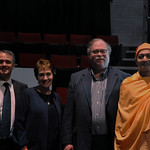 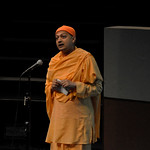 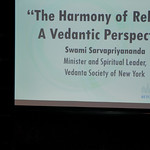 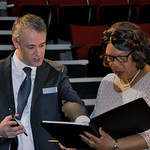