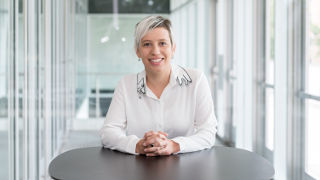 Tsuria brings more than a decade worth of academic achievements and diverse cultural experiences to her new role as an assistant professor. Originally from Israel, Tsuria received her B.A. in Jewish Philosophy and Business Management at Hebrew University of Jerusalem, and then traveled to Denmark to earn her M.A. in Comparative Religious Studies at Copenhagen University. Besides living abroad in two different locations, Tsuria has also traveled to more than nine countries, each adding more insight to her research and academic interests. Her unique background has provided her with the knowledge that people learn the most when they engage with different types of communication. She hopes to create a classroom in which all students ask questions and lead discussions in interesting and thought provoking topics.

"I aim to turn my classroom into a 'brave space,' where difficult questions and topics are raised and carefully examined and answered, and where innovative thinking and research will take place. I am not afraid to use technology in the classroom, and I believe the work students put in will be worth their time," explained Tsuria. "The College’s academic programs are full of innovation and growth. I love those two concepts and I hope to accomplish quite a lot this year."

Tsuria's research interests focus on the intersection of digital media, religion, and feminism, and she aims to incorporate them into classroom discussions. Tsuria's dissertation examined how the issues of gender and sexuality are discussed on Jewish websites and what traditional norms are reinforced through this online communication. Some research topics from her previous published work include religious online Q&A forums as self-regulation tools, Islamophobia, and different digital methods. She has also collaborated with other scholars on topics such as memes and mobile applications.

"Currently, I am interested in exploring the relationship between technology and society, and how new communication tools are used to enforce old norms and how the role of power is incorporated into this," said Tsuria. "I would also like to explore some new issues with artificial intelligence, and the Internet of Things."

Her research has paved her way to presenting at conferences around the world, earning a multitude of awards and recognition for her work. Some conferences she has presented at include the National Communication Association, the International Society for Media, Religion and Culture, Theorizing the Web at The Museum of the Moving Image, and a student-led conference at Texas A&M University entitled Communicating Diversity, in which she received a Top Paper Award. This past academic year alone, Tsuria received two academic awards titled the 2017 Tiffany Hunnicutt Award- Outstanding Graduate Student, and the 2016 STAR Award, Dissertation Writing Fellowship - College of Liberal Arts, Texas A&M University.

"A great experience I had was when I presented at the International Society for Media, Religion, and Culture, which was held in Seoul, South Korea last year," said Tsuria. "I met scholars from all around the world working on media and religion, and I had a chance to explore South Korea. Although I have presented at numerous large conferences, I prefer smaller ones because you get to really interact and receive feedback from people who share the same passions as you. So my favorite conference I have presented at is Theorizing the Web, which takes place in The Museum of the Moving Image in Queens, New York."

For the Fall 2017 semester, Tsuria will teach Intro to Digital Communications, New Media and Organizational Communications, and Methods and Strategies in Communication. She is currently working on her first book, which will expand her dissertation research. In addition, she is considering further articles about theoretical, methodological, and ethical questions in the field of digital media.

For more information about Graduate Studies within the College of Communication and the Arts, please contact Dr. Ryan Hudes at ryan.hudes@shu.edu.