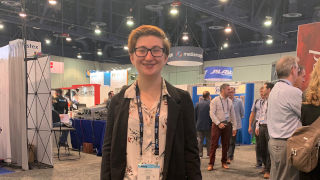 Rachel Haggerty at the NAB Show in Las Vegas, Nevada, pictured on the showroom floor where she spoke with vendors about new technology in the broadcast field.

Rachel Haggerty, a student in the Visual and Sound Media program within the College of Communication and the Arts, was recently accepted into the National Association of Broadcasters' (NAB) Technology Apprenticeship Program (TAP), a competitive opportunity that accepts less than ten applicants nationwide.

Over six months, students in the program are exposed to the broadcast engineering and technology industry through a series of activities that refine their skills and prepare them for successful careers post-graduation. Key highlights include placement in a two-month, hands-on apprenticeship at a radio or television station and educational training for the Society of Broadcast Engineers' (SBE) exam, taken to become a Certified Broadcast Technologist.

"I was beyond excited when I found out I was accepted to the program," said Haggerty. "I applied right away when the applications were sent out. The program is incredibly detailed, and I'm looking forward to really understanding the field and figuring out how I will best fit in the role of a future engineer."

She is one of four students selected for this year's cohort. TAP was an ideal fit for Haggerty who is heavily involved in the Technical Operations Department at WSOU 89.5 FM. "One of the most important parts of radio is the technology. If something goes wrong, the engineer steps in to troubleshoot. This program will help me become that person in one of my favorite environments, the radio station," commented Haggerty. 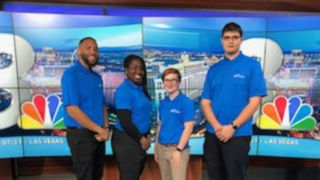 In April, Haggerty traveled to Las Vegas, Nevada for the NAB Show, an annual gathering of over 100,000 industry professionals discussing the latest happenings in the industry. There, she joined sessions on career opportunities for broadcast engineers, learned about current trends and attended events on Women in Technology and the Broadcast Engineering and Information Technology Conference. Outside of the show, Rachel also toured the studios of NBC with her fellow TAP participants.

"Radio and TV stations, as well as networks and production companies, are all facing a shortage of broadcast engineers and broadcast technologists and TAP is helping to address this problem," said Mark Maben, general manager of WSOU. "I am extremely proud of Rachel for being accepted into this prestigious program. She is bright, creative, hardworking and exactly the type of broadcast engineer our industry needs right now and in the decades ahead."

The program also exposes students to various professional opportunities, including networking. Presently, Haggerty is actively preparing to be placed in a summer apprenticeship where she will work hands-on at a radio or television station. In the past, participants have worked in organizations including iHeartRadio, Sinclair Broadcast Group, Ion Media Networks and more. 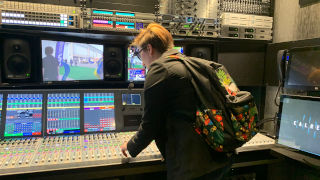 During the show, she also visited a remote broadcast truck and was able to view the technology used by professionals in the field.

While Haggerty has already gained experience in the field through her work in the station at WSOU as well as in the classroom and television studio during her visual and sound media classes, she's eager to learn more. "One thing that sets me apart from the engineering field is the sheer amount of communication work I’ve done," she noted. "I've entered the program with the education of someone in news and sportscasting, rather than just a technology education. The hands-on training is going to be my favorite part because I'll be observing established engineers and trying things myself."

The program will conclude in September, finishing with a two-day learning conference at the NAB Headquarters in Washington, D.C., with educational sessions from the NAB's technology department, active broadcast engineers and the Leadership Foundation.