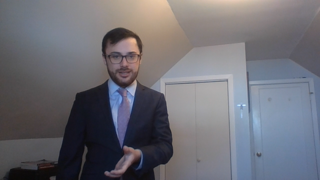 Continuing to perform well in asynchronous and virtual tournaments, Seton Hall's Forensics Brownson Speech and Debate Team, housed within the College of Communication and the Arts, earned over 70 awards in its last three competitions.

"Asynchronous competition has actually been a really nice supplement to our regular schedule. It's definitely a strange format since public speaking is generally expected to be in front of a live audience, but the few asynchronous tournaments have been great and were run smoothly," said Keegan. "It is also really validating to do well both individually and as a team at these asynchronous events because it's a testament to our abilities as speakers to adapt to unusual conditions on the fly."

"I would never have dreamed 35 years ago, when I founded the individual events program, that our academic competitive landscape would include small screens, audio devices and cameras," said of Catherine Zizik, M.F.A., founding director of forensics and associate professor of communication. "I am so proud of our students' abilities to adapt and transform themselves for yet another level of rhetorical excellence. Clearly, we are harvesting our treasures and investing in our hidden abilities."

Due to budget considerations, Sumereau competed solo at the second day of the tournament. He brought home five awards and earned first place Overall Speaker of the weekend.

"These accolades represent so much more than just rankings at a competition. At the core of our program is the development and practice of critical thinking, logic, research, creativity, oral acuity, empathy and effective listening," said Zizik. "It is a joy to have a group of motivated students skillfully  advocate their messages across the nation as they represent Seton Hall with grace and dignity."

Brownson Forensics Speech and Debate team is known for its tradition of rhetorical excellence, stemming back over 75 years. The team benefits from the guidance of head coach Sam Ohrenberger-Hopkins, M.A., lecturer of communication.

To learn more about the Brownson Speech and Debate team, visit here »