Bob Ley '76, whose career at ESPN spanned 40 years, stepped out of retirement to provide play-by-play coverage on WSOU 89.5 FM of the Feb. 23 Seton Hall vs. St. John's men's basketball game. The broadcast marked the first time that Ley returned to the air where his career started, reprising his role as a sportscaster when he was a student at Seton Hall University.

Ley returning to Seton Hall to reprise his role as a WSOU broadcaster was covered by news media throughout the region, including by famed columnist Phil Mushnick in The New York Post, ESPN, NJ.com, Asbury Park Press, The Record, CBS Sports during TV coverage of the game and a feature interview with News12 New Jersey. In addition, media industry outlets throughout the United States supplied coverage, including Barrett Sports Media, Radio Online, The Morning Mouth, New Jersey Stage and Radio Ink. 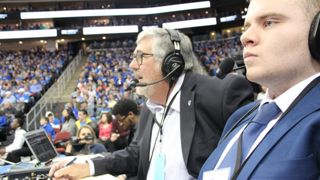 After a nearly 45-year absence, sports media icon Bob Ley returned to the WSOU airwaves on Feb. 23 to take a turn at play-by-play during WSOU's broadcast of the Seton Hall Pirates' contest against St. John's. Prior to the game, Ley received a warm welcome from the crowd. (Credit: Wilnir Louis)

Ley started his broadcasting career at WSOU, where he did play-by-play of Seton Hall basketball and baseball games and served terms as sports director and program director for the student-run station.

Jerry Carino of the Asbury Park Press writes of the hall of fame broadcaster's return to WSOU to announce the game with students,

Ley was joined by two WSOU regulars, Dalton Allison and Michael Daly, who pitched in as color analysts. They've gotten to know him over the past year as Ley has returned to South Orange for several occasions.

"He's been great as a mentor," Allison said. "When I heard he was going to be broadcasting with us, it was a very surreal moment. I grew up watching Bob Ley on television. So be able to go from that side of the screen to sitting side-by-side with him and doing a game, it's absolutely amazing."

In his interview with News 12, Ley noted that "WSOU is why I went to the school. To learn broadcasting and, of course, the outstanding education."

Ley also stressed the importance of working with current Seton Hall students through classroom appearances, master classes, studio work and mentorship. Since his retirement, Ley has taken a more active role in campus and classroom activities at Seton Hall, and has been a primary force in the University's Sports Media Speaker Series as well as the Sports Business and Media Ethics Symposium, which have featured broadcasting greats such as Bob Costas, and Stephen A. Smith as well as Adam Silver, the commissioner of the NBA.

Prior to the broadcast from the Prudential Center in Newark, N.J., Ley was honored on the court at start of basketball game, as well as at a reception with WSOU alumni and current staff members. The festivities were in recognition of Ley's recent retirement from ESPN and his hall of fame media career.

About WSOU
WSOU 89.5 FM, which began broadcasting in 1948, is the student-run radio station of Seton Hall University. Celebrated for its loud rock format and coverage of Seton Hall athletics, WSOU's signal reaches all five boroughs of New York City and much of northern and central New Jersey and is available on iHeartRadio. WSOU was the 2016 winner of the National Broadcasters Association's Marconi Award for Noncommercial Station of the Year and a 2019 nominee for the Marconi Award for Best College Radio Station. More information about the station can be found online at wsou.net and www.facebook.com/WSOUFM.