Behind the Scenes with Major League Baseball 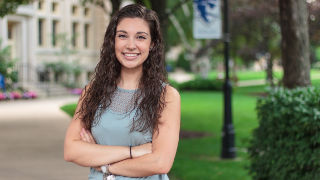 For Emily Mastrobuoni, class of '15, choosing a college major meant finding a school that would help her craft a career out of two things she was known for – her big voice and big personality.

Mastrobuoni took those talents, combined with a love of sports, to Seton Hall University where she majored in Broadcasting, Visual and Interactive Media with a concentration in television production at the College of Communication and the Arts.

Four years later and fresh from graduation, Mastrobuoni took all of her knowledge and skills and landed a job as a graphics broadcast associate responsible for all in-studio programming at the MLB Network. And - it's not just baseball in the background. Mastrobuoni is also responsible for graphics that go on air for the NHL Network – creating scoreboards, scrolling tickers, player and team statistics and populates monitors inside the studios.

Now, Mastrobuoni is one of the few people in her department at the MLB Network who went to school for broadcasting and also worked in a control room – invaluable skills she gained during the long hours she spent in University's TV studio. Four years as a Pirate TV member, and two years with Athletics' Pirate Sports Network gave her hands-on experience covering Seton Hall men’s basketball team from Newark's Prudential Center. 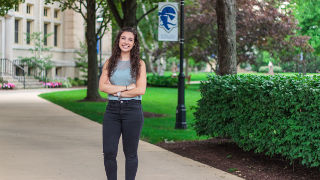 "Both of these platforms allowed me to work with others who were passionate about this field and help each other get better and prepare for the future," she said.

She credits the internships with landing the job she has today "because having that experience and diversity is what helps you move your way up in this industry."

Mastrobuoni spoke highly about her professors and instructors in the college, specifically reminiscing about some standout lessons in work ethics. "My professors brought so many years of knowledge and life experiences inside the classroom," Mastrobuoni said. "They preached working hard, practicing and getting exposed to as many things as we could in order to find our successes."

"I wouldn't be where I am today without their guidance and constant support throughout my years at Seton Hall," Mastrobuoni said.

Veteran Sports Illustrated Journalist B.J. Schecter is leading the creation of a Sports Media program at the College of Communication and the Arts. Efforts to collaborate with other campus partners are already underway, including teaming up with the Stillman School of Business and its Center for Sport Management and the Seton Hall Sports Poll. Practicums from the school's award-winning radio station WSOU and the Pirate Sports Network will also be incorporated.

The Sports Media program will be offered as a minor in Fall '18.

The author of this feature, Rema Rahman, is a Seton Hall alum from the College of Communication and the Arts. Class of 2005, Rahman majored in Communication.

All images included with this article were taken by Seton Hall alum Katherine Cahalin. A Visual and Sound Media major in the College of Communication and the Arts, Cahalin graduated in 2016.