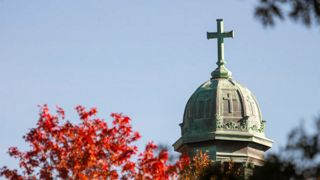 On Saturday, March 27, 2021, family, friends, and former colleagues and students of Rev. Richard M. Nardone gathered for a Memorial Mass in the Chapel of the Immaculate Conception to celebrate the 10th anniversary of his entrance into eternal life. If Fr. Nardone were to describe the celebration, he might use his signature saying: "Ah yes…another jewel in my crown." Fr. Nardone, whose life uniquely embodied the spirit of Seton Hall, made the University a true home for mind, heart, and spirit over his many years on campus, and he brought this dedication to enriching the whole human person with him on all his travels.

And travel he did. Interested in experiencing God's wonders across the globe, Fr. Nardone relished his many journeys. Among his favorite destinations was Iceland, and he enjoyed all things British. As his niece, Marianne Nardone, recalled, his love of travel was contagious: "He instilled in me a great love for travel, which sometimes took on a gently competitive spirit." Fr. Nardone was known to often say, in a "Father is not amused." However, he was clearly very amused by and appreciative of his interactions with people from all walks of life.

While his intellectual and physical journeys took him around the world, his life was anchored in and around Seton Hall. Born in Orange, N.J., Father Nardone graduated from Seton Hall University with a B.A. in philosophy in 1950, and he earned a Ph.D. in theology from the University of Toronto. He graduated with an S.T.L. from Catholic University, Washington, D.C., in 1954. He lived in South Orange for more than 40 years. A world traveler, Fr. Nardone enjoyed most of all coming home to Seton Hall. As Marianne shared, "Seton Hall, and its religious community and band of students, was despite all his grand travels his most favorite place. He was at home there." At Seton Hall, Fr. Nardone experienced the same sense of welcome that he extended to the thousands of students he taught during his 32 years on the faculty, as a professor of Religious Studies from 1968 through 2000.

"I met Fr. Nardone in September of 1999, when I started at Seton Hall University," shared Dr. Ines Murzaku, Professor of Religion and Director of Catholic Studies Program/Department. "In fact, I was hired to replace him after his retirement. I was impressed with his wisdom and his willingness to share his experience with me. He helped me in many ways, from giving me course syllabi to sharing office keys. We remained in touch over the years until his death. I treasured his mentorship."

Although the Catholic Studies Program/Department was not officially established until a year after Fr. Nardone's death, his legacy is living on in Catholic Studies students. "Catholic Studies is grateful for the Fr. Nardone endowment, which provides generous scholarships to our students," said Dr. Murzaku. While Fr. Nardone, in his humorous way, would say "I am generous to a fault," this statement proved many times over to ring true.

This spirit of generosity was a hallmark of his life. While students and colleagues alike appreciated Fr. Nardone for his dry sense of humor and his zeal for discussing theology and literature, one of his deepest expressions of generosity was in the love he shared with his family. Marianne shared that "His deep and sincere faith that he put into actions was done most often in a modest way." He shared his faith through action in ways that often surprised Marianne throughout the life of her "Uncle Dick."