Dramatic Reading of G.K. Chesterton's 'The Sign of the Broken Sword' 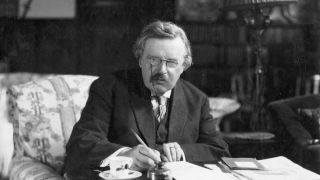 The Catholic Studies Program in collaboration with The Pirates of Irish Persuasion and Extraction (PIPE) and the G.K. Chesterton Institute for Faith & Culture proudly present a dramatic reading of G.K. Chesterton's Father Brown story, "The Sign of the Broken Sword."

The event will take place on Monday, November 5 at 7 p.m. in the Theatre-in-the-Round – University Center.

The event is free and open to the public.

The dramatic reading of Chesterton's Father Brown Story is adapted and directed by Dr. James McGlone, Professor Emeritus of Catholic Studies and Communications.

The presentation will also include a commentary by Father Ian Boyd, CSB, Editor of The Chesterton Review and Dr. Dermot Quinn, Professor of History at Seton Hall University.

About the Lecture:
Chesterton's detective, Father Brown, has none of the expected qualities of a perceptive sleuth. To begin with, he is so ordinary in appearance that most of those involved in the crime, police, bystanders, and even the killers themselves, overlook his presence on the scene. Moreover, Chesterton seems to ignore all the usual clues expected in a police novel; there are not any forensic toys that lead to the culprit. Father Brown instead tries to feel like the murderer, and when he feels like the murderer, of course, he knows whom the murderer is. Yet, in spite of Father Brown and his strange methods, he manages to solve the most bizarre crimes.

About Catholic Studies:
The Catholic Studies Program at Seton Hall University offers an innovative, interdisciplinary curriculum for students of any creed who are interested in deepening their knowledge of Catholicism's rich intellectual tradition and living heritage. Combining the study of history, philosophy, theology, literature, art, sociology, and other disciplines, Catholic Studies focuses on the church's dialogue with culture and encounter with the world. Students interested in Catholic Studies have the option to pursue a major, minor, or certificate that complements and enhances the University's other degree programs and fields of study.

About the G. K. Chesterton Institute for Faith & Culture and The Chesterton Review
The G. K. Chesterton Institute for Faith & Culture is located at Seton Hall University, South Orange, N.J. Its purpose is to promote the thought of G. K. Chesterton and his circle and more broadly, to explore the application of Chesterton ideas in the contemporary world. The Institute's work consists of conferences, lecture series, research and writing. The Chesterton Review, founded in 1974, has been widely praised both for its scholarship and for the quality of its writing. Edited by Father Ian Boyd, C. S. B., it includes a wide range of articles not only on Chesterton himself, but also on the issues close to his heart in the work of other writers and in the modern world. It has devoted special issues to C. S. Lewis, George Bernanos, Hilaire Belloc, Maurice Baring, Christopher Dawson, Cardinal Manning, the Modernist Crisis, J. R. R. Tolkien, Fantasy Literature, and a Special Polish Issue. The Chesterton Review also publishes one annual issue in Spanish and an annual supplement in Portuguese and French. For information about the Institute or The Chesterton Review please contact chestertoninstitute@shu.edu or click here.