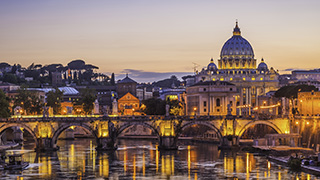 On Thursday, April 25, co-sponsored by the Catholic Studies Program, the College of Communication and the Arts and Walsh Gallery, alumna Amy Giuliano will present the lecture: "The Architecture of Rome and the Rise of Christianity."

Director of the Center for Catholic Studies, Msgr. Richard Liddy, will provide an introduction with comments on Art and the Mission of the Catholic University. Using examples from ordinary life, Msgr. Liddy will point to art as freeing us from our ordinary ways of thinking and living so that we might live a fuller and more promising life.

Giuliano's presentation will take the audience on a journey through the Catacombs, far outside the walls of Rome, to the first public Christian Church— the Lateran Basilica— just within the city limits, and to the Church of Cosmas and Damian on the Via Sacra in the heart of the city. This visual church history lesson will examine the significance of historical events that bear witness to these sacred places, and will include a discussion of the symbolic art of the catacombs and a comparison of various Christian worship spaces of the period.

This lecture will be held in the Walsh Gallery of Walsh Library begin at 2 p.m. All are welcome to attend. 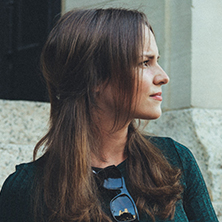 Amy Giuliano holds degrees in Religion & the Visual Arts from Yale, Theology from the Angelicum in Rome, and Catholic Studies from Seton Hall University. She teaches Art History and Catholic Studies at Sacred Heart University, writes sacred art essays for the Magnificat, and travels the world creating virtual tours of the Church's artistic patrimony for students with her Yale-funded small business, Vadis VR.

About Msgr. Richard Liddy
Monsignor Richard M. Liddy is University Professor of Catholic Thought and Culture and the Director of the Center for Catholic Studies at Seton Hall University. He is also a member of the Department of Religion. Previously he was rector of Immaculate Conception Seminary/School of Theology and spiritual director at the North American College in Rome. His doctoral dissertation was on the work of the American philosopher of art, Susanne K. Langer. In 1993 he published a work on his teacher, the Jesuit philosopher theologian, Bernard Lonergan (1904-1984), entitled Transforming Light: Intellectual Conversion in the Early Lonergan. His book, Startling Strangeness: Reading Lonergan's Insight was published in 2007. It deals with his own encounter with Lonergan as a student in Rome in the 1960s. He has also written articles on the thought of Blessed John Henry Newman as well as on the topics of art, education and formation. Recently he has been working on the GEM Fellows program, aimed at integrating the university disciplines and sponsored by the Center for Vocation and Servant Leadership and the Center for Catholic Studies.