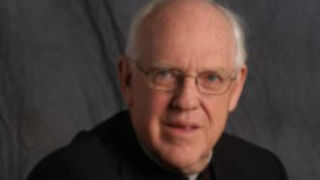 Monsignor Richard Liddy's 1993 book, Transforming Light: Intellectual Conversion in the Early Lonergan, has been translated into Italian as Conoscenza e azioni dell’intellectto. The book was published this summer by the Association of Catholic Teachers in Italy (AIMC – Edizioni ECOGESES) and is the fruit of an annual meeting of Lonergan scholars connected with the Universitá del Sacro Cuore in Piacenza, Italy. Intellectual conversion was a central theme in the works of the Canadian Jesuit philosopher-theologian, Bernard Lonergan (1904-1984). Lonergan's thought was influenced by his reading of the classic writers, Plato, Augustine, Aristotle, and Aquinas, as well as John Henry Newman and the methodologies of the modern sciences.

Lonergan illustrated the theme of intellectual conversion through Saint Augustine's account of reading, "a few books of the Platonists" prior to his religious conversion. He then experienced a profound transformation of mind and the realization that the word "real" was quite different from the meaning of the word "body."

In Insight: A Study of Human Understanding (1957), Lonergan illustrates that a similar transformation is operative in the methodologies of the modern sciences. In his work, Method in Theology (1972) Lonergan related intellectual conversion to religious and moral conversion.

Lonergan was Monsignor Liddy's professor at the Gregorian University in Rome in the early 1960s. Presently, there are over 30 Lonergan Centers and Institutes throughout the world – one here at Seton Hall. The University of Toronto Press is currently completing the publication of the twenty-five volumes of the Collected Works of Bernard Lonergan. For more information visit the Center for Catholic Studies website or contact Msgr. Liddy: liddyric@shu.edu, (973) 761-9221 or Erica Naumann: catholicstudies@shu.edu or (973) 275-2407.

About Monsignor Liddy
Monsignor Liddy is currently a professor in the Department of Religion and Director of the Center for Catholic Studies. Previously he served as spiritual director and rector/dean of Immaculate Conception Seminary School of Theology. In 1990 he served as acting Chancellor of the University. Msgr. Liddy's doctoral dissertation examined the work of the American philosopher of art, Susanne K. Langer. In 1978 he published a book of poetry, In God's Gentle Arms. In 1993 he published Transforming Light: Intellectual Conversion in the Early Lonergan. In 2007 he published Startling Strangeness: Reading Lonergan's Insight. It recounts his own encounter with Lonergan as a student in Rome in the 1960s. In 2006, Msgr. Liddy founded the Bernard J. Lonergan Institute at Seton Hall. The Institute functions as a research center containing all significant primary and secondary literature on Lonergan, and serves to implement Lonergan's vision of integrating Catholic theology with all areas of modern culture. Msgr. Liddy has written numerous articles on Lonergan and on John Henry Newman as well as on art, education, and Catholic Studies.

About the Center for Catholic Studies
Founded at Seton Hall University in 1997, The Center for Catholic Studies is dedicated to fostering a dialogue between the Catholic intellectual tradition and all areas of study and contemporary culture, through scholarly research and publications and ongoing programs for faculty, students, and the general public. In 2001, the Center conducted the annual faculty summer seminar, "The Core of the Core," which originated the present University Core Curriculum. The Center also developed the undergraduate degree program in Catholic Studies with its major, minor and certificate, which in 2012 became the Department of Catholic Studies. The Center continues to support the Department with scholarship aid and its ongoing program of co-curricular activities.

Focusing on the central role of the faculty, the Center is the sponsor of regular Faculty Development programs, including lectures, seminars and retreats. The Center also administers two national faculty development programs: Collegium: A Colloquy on Faith and Intellectual Life, and The Lilly Fellows Program.

The Center maintains a global focus in international scholarship and is the home of the G.K. Chesterton Institute for Faith & Culture, as well as the Bernard J. Lonergan Institute. The Institutes offer opportunities for study and research, as well as ongoing programs related to faith and culture. In addition, the Micah Institute for Business and Economics concentrates on communicating Catholic Social Teaching and ethics to business education at Seton Hall and the wider business community. The Center also publishes the prestigious Chesterton Review and The Lonergan Review.