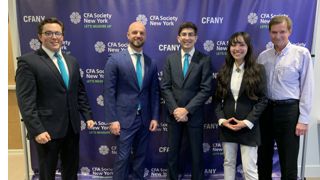 Four students in the Stillman School of Business have earned a "Final Five" spot in the CFA Institute Research Challenge. M.B.A. students Timothy Kolesaire, Claudia Ko and Steven Pomponio, along with undergraduate senior Anders Opitz, will be competing against university teams from Fairfield College, Hofstra University, Rutgers University and SUNY Binghamton on Friday, March 6. They plan to present their research to a panel of Wall Street experts for the New York regional title.

The first CFA challenge was held in February. In preparation for the competition, the team presented their research to students and faculty at the 14th Annual Jim and Judy O'Brien Capital Markets Colloquium, which is co-hosted by the Stillman School and Seton Hall University Libraries.

"The opportunity to present as a team and hold a Q&A helped manifest the confidence we needed and showcased at the CFANY in February," said Claudia Ko, a graduate student pursuing her MBA in Marketing. "We are overjoyed to bring the same energy to the Final Five presentation."

Team advisors Professor Anthony Loviscek, chair of the Department of Finance, David Dineen, portfolio manager at Granahan Investment Management, Inc. and finance professor Tony Garcia support the team through each round of competition. Team member Steven Pomponio, who will be receiving his MBA in Finance and IT Management this spring, said "Our advisors have been great mentors that provide us with helpful feedback as we progress through these competitions."

A Seton Hall team has made the "Final Four" an impressive 12 times in the past 16 years and even took top honors in 2006 and 2007. In 2017 a Stillman team won the American Championship and advanced to the Global Finals. This year, the team is in the "Final Five" after edging out a large pool of local competitors.

Timothy Kolesaire, who is pursuing his M.B.A. in Finance, serves as captain for the CFA team. "It is an honor to be the captain of such extraordinary and talented students," says Kolesaire. "Each member is disciplined, motivated, and focused on our end goal. In addition, the team has established a unique chemistry that I believe gives us a competitive advantage."

Anders Optiz, the only undergraduate on the CFA team, added that he started preparing a year in advance for the competition. "I knew to be a leader within the competition I needed to be sharp in a variety of areas," Optiz said. "After transferring to Seton Hall, I can say with certainty that the support we receive from peers and professors was the catalyst that pushed my team and me to where we are today." Optiz transferred from Duquesne University in 2018 and currently double majors in economics and finance.

The winners from each regional competition (the Americas, Asia Pacific, Europe, Middle East and Africa regions) advance to the Global Final, where one team emerges as the global champion of the CFA Institute Research Challenge.

The CFA Institute has more than 120,000 members and is responsible for the administration of the Chartered Financial Analyst credential. In last year's CFA Institute Research Challenge more than 6,100 students from nearly 1,200 universities and 95 countries competed.