U.S. News Ranks the Stillman School's Undergraduate Programs No. 108 in the Nation 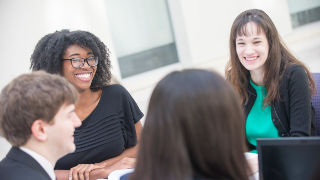 U.S. News & World Report's 2019 America's Best Colleges guide has ranked the Stillman School of Business among the "Best Undergraduate Business Programs." The School is ranked 108, rising one spot since last year and more than 20 places in the last three years.

It is important to note that only business programs accredited by the Association to Advance Collegiate Schools of Business (AACSB) are considered for inclusion in the business ranking, and the Stillman School is one of only 186 programs worldwide to hold AACSB accreditation of both business and accounting programs.

"This continued increase in our ranking reflects Stillman's ongoing commitment to strengthening its programs through a focused emphasis on ethics and applied learning," said Joyce Strawser, dean of the Stillman School of Business. "I am fortunate to work with a wonderful community of students, faculty and staff who are dedicated to the pursuit of innovation and excellence. We are proud to see our efforts being recognized by our peers among AACSB-accredited schools."

Undergraduate enrollments for the Stillman School are also on the rise and employment rates among grads remain strong. The School has experienced significant increase in student enrollments in the last several years. This fall 332 new freshmen joined the Stillman community – the School's largest freshman class in more than 34 years. Moreover, among its graduates, 9 out of 10 report employment in a career-related field six months after graduation.

Earlier this year U.S. News & World Report recognized the Stillman School for having outstanding academic offerings within its graduate business programs as well (ranked the #97 part-time M.B.A. program in the nation).

Seton Hall University ranked 119 in the most recent guide, moving up five places among the top tier of national universities. The 2011 edition of U.S. News & World Report's America's Best Colleges guide ranked the University at 136. Since that time, Seton Hall has risen 17 places.