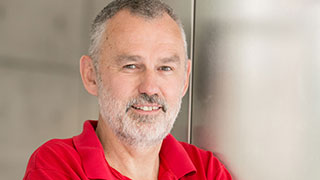 Laurence McCarthy, professor of management and director of the Institute of International Business, has been elected as 40th president of the Gaelic Athletic Association (GAA).

The GAA is Ireland's largest sporting organization and has been recognized as one of the premier amateur sporting associations in the world. It promotes Gaelic games such as hurling, football, handball and rounders and collaborates with sister organizations to promote ladies football and camogie. The Association also celebrates Irish culture by reviving traditional Irish music, language and dance.

McCarthy is the first overseas candidate in the GAA's 136-year history to win the presidency.

His election came after four rounds of voting, and during his acceptance speech, he paid tribute to his main competitor and three other candidates.

"Thank you for a great campaign," said McCarthy while addressing the Association. "We've crossed paths with each other up and down the country and arguably around the world, and it was a wonderful hard-fought contest as it should be."

He went on to thank many others including his wife Barbara and their two sons, Conor and Shane.

Originally from Bishopstown in Cork, Ireland, McCarthy immigrated to New York in the 1980s. During his time in the tri-state area, he has been deeply involved with the GAA including serving as the secretary and chairman of the New York county board.

A professor at Seton Hall since 1999, McCarthy teaches undergraduate and graduate courses in sport marketing and sport management. He has also led a number of overseas courses such as Doing Business in Italy and Doing Business in Ireland, and his research has been featured in top sports publications including the Journal of Sport Management, Sport Marketing Quarterly and the European Journal of Sport Management.