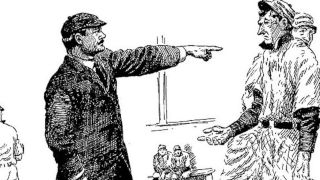 The most recent Seton Hall Sports Poll asked the public what it thought of officiating in sports. The poll's findings were featured by USA Today, NJ.com, ESPN, Legal Sports Report, SportsBetting.com and in tweets from a number of reporters, including Jacob Bogage of the Washington Post.

The poll found that:

Despite seeing nearly half of all disputed calls reversed by video replay, Americans perceive the officiating of Major League Baseball better than any other major sport.

And what's truly remarkable in this day and age of polarization, is that Democrats and Republicans are in agreement on whether officiating is good or terrible on a sport-by-sport basis.

"At last, something they can agree on," noted Rick Gentile, director of the Seton Hall Sports Poll, which is sponsored by the Sharkey Institute within the Stillman School of Business. "The differences were negligible in almost every case."

These are the findings of a Seton Hall Sports Poll, conducted last week among 703 adult Americans across the country on both landlines and cellphones. The Poll has a margin of error of +/-3.8 percent.  (The margin of error for the smaller sample of Democrats and Republicans, 176 of each, is +/- 7.5 percent.)

Major League Baseball scored a 64 percent approval rating for umpiring, with only 3 percent saying it was terrible.  And here we find 65 percent of Democrats saying it is good, and 67 percent of Republicans.

For the NFL, 48 percent rated the officiating as good (57 percent Democrats; 54 percent Republicans), but 27 percent called it terrible. A separate question, the suggestion of using replay on every call, found the public equally divided – 41 percent approving, and 42 percent disapproving, with 17 percent having no opinion. (While the parties can agree on officiating, they don't agree on how to improve it. On this there was division by party, with 51 percent of Democrats approving of replay on every play, but only 27 percent of Republicans approving.)

The NBA had a 49 percent rating of "good" for its officiating; the NHL 44 percent; college basketball 48 percent, and college football 53 percent, all very close along party lines (see breakdown by party at the end of this release).

In addition to these findings, the poll asked people whether or not they thought "legalized sports betting influences people's reaction to officiating of NFL games."