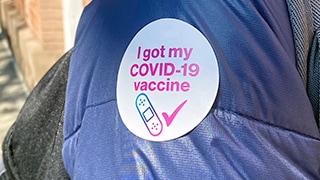 As many states move to "reopen" and allow full capacity at sports venues, sports fans and the general public seemingly remain cautious about event attendance without proof of vaccination, the wearing of masks and/or social distancing.

These were the findings of a Seton Hall Sports Poll conducted May 21-24 geographically spread across the United States using a national representative sample weighted according to gender, age, ethnicity, education, income and geography based on U.S. Census Bureau figures. The Poll surveyed 1,554 adult respondents with a margin of error of +/- 3.2 percent.

Social Distance Seating
A rather large number – 68 percent of the general population, 72 percent of self-described sports fans and 77 percent of avid fans – favored designated areas within venues to separate those who wished to maintain social distance seating.

Proof of Vaccination
As to a requirement by sports teams that attendees of sporting events show proof of vaccination, 53 percent of the general population agreed. The number went up to 60 percent in favor of such a requirement among sports fans and to 71 percent for avid fans.

Masks
As for wearing masks while attending sporting events, it was 52 percent of the general population in favor of this requirement, while 56 percent of sports fans and 59 percent of avid fans agreed.

The respondents who disagreed with these precautionary requirements at sporting event venues were comparatively low. For special sections, it was 18-17-15 percent (general public, sports fans, avid fans); for vaccination proof, 32-29-20 percent disagreeing, and for mask wearing, 32-33-30 percent disagreeing.

Fans Who Would Attend Sporting Events with Vaccine, PPE and Social Distancing Up 7%

Among the general public this question received a modest uptick of just one percent (from 50 to 51 percent) since it was asked last month. However, among sports fans the positive response rose seven points to 69 percent who said they would be willing to attend an outdoor sporting event with vaccine, PPE and social distancing – the largest jump in positive responses since the vaccine rollout.

"This is a significant indicator of the trend to return," said Charles Grantham, director of the Center for Sport Management within Seton Hall's Stillman School of Business. "Sports fans seem cautiously optimistic, but also seem to favor precautions regardless of the official relaxation of restrictions over the last month."

Full House?
Perhaps consistent with the overall call for caution, when asked if leagues and teams should allow full capacity fan attendance in their stadiums without any mention of precautionary measures in the question, 46 percent of the public said yes, with 36 percent opposed. Among sports fans the number in favor rose to 54 percent (33 percent opposed), but still lagged by 15 percent those who said they would attend with vaccination, PPE and social distancing.

"Fifteen percentage points is a margin worth noting, and the leagues would be wise to take heed of the concerns of their customers," said Seton Hall Marketing Professor and Poll Methodologist Daniel Ladik. "The ‘new normal' appears to be a cautious one."

Charted breakdowns of questions are shown in an online version of this release which may be found by clicking here.

ABOUT THE POLL
The Seton Hall Sports Poll, conducted regularly since 2006, is performed by the Sharkey Institute within the Stillman School of Business. This poll was conducted online by YouGov Plc. using a national representative sample weighted according to gender, age, ethnicity, education, income and geography, based on U.S. Census Bureau figures. Respondents were selected from YouGov's opt-in panel to be representative of all U.S residents. This poll release conforms to the Standards of Disclosure of the National Council on Public Polls. The Seton Hall Sports Poll has been chosen for inclusion in iPoll by Cornell's Roper Center for Public Opinion Research and its findings have been published everywhere from USA Today, ESPN, The New York Times, Washington Post, AP, and Reuters to The Wall Street Journal, Forbes, CNBC, NPR, Yahoo Finance, Fox News and many points in between.