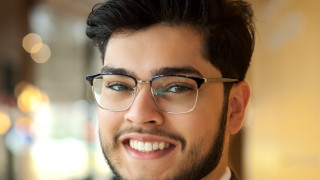 Shah is set for success in Seattle.

Daring to Dream
"I applied to internships with Amazon since the summer of my freshman year," he recalls. "Nothing ever came to fruition; I kept getting rejection letters."

One day at the beginning of his senior year, Shah decided to continue pursuing Amazon, and he applied for a few full-time opportunities. Soon after, he forgot about it. While he was busy attending a wedding with his family in India, he received an unexpected email from Amazon, asking him to complete a prerequisite test, which then led to an interview.

"After a grueling three-and-a-half-hour virtual interview on a Friday in January, I felt like I didn't get the job," he admits. Shah was wrong. Days later, in a dream-come-true moment, Shah received a job offer from Amazon the following Wednesday.

Inspiring Internships
During the years while Shah worked toward his bachelor's degree, he also served as an intern with an impressive array of companies, including Johnson & Johnson as a finance intern; NBC Universal as an ad sales intern; Par Pharmaceuticals as a revenue control intern; and Armored Knight Group as a finance intern.

"It's a wide range," says Shah. "They gave me a chance to test out the water in different industries and locations, like the heart of New York City, and San Francisco." Even the job functions were different. "While some were traditional finance internships, the NBC Universal position was in Ad Sales," he explains, "where I was introduced to media-related vendors and ad sales programs. I had never had any marketing experience before that."

Diligence and Dedication
Shah is no stranger to hard work. In addition to his multiple internships, Shah served in University leadership roles, such as President of Seton Hall's Student Government Association (SGA) for two terms, from 2018 to 2020, representing a student body of over 10,000 students. Prior to his election as President, he served a one-year term as SGA Treasurer from 2017-2018, allocating and maintaining a $160,000 budget line to 95 different student organizations.

During his tenure in student government, Shah met Dr. Shawna Cooper-Gibson when she started her new role as Vice President of Student Services in October 2019. They developed a relationship of sharing information with one another.

"When Rishi and I met in fall 2019," says Cooper-Gibson, I was excited to work with him. Rishi exhibited a vision of collaboration and enhanced student engagement that would benefit not only students, but the entire University community," she states. "His style of student leadership encouraged communication with both his peers and administration."

Shah is equally enthusiastic about having worked with the VP of Student Services. "She helped us navigate our experiences with the Executive Cabinet," Shah discloses. "We [the SGA officers] learned how to interact professionally with upper level management," a wealth of experience that he attributes to Cooper-Gibson's influence.

Leading, Serving and Learning
Additionally, he volunteered his time as an editor for The Stillman Exchange newspaper, where he published six bi-weekly articles for the opinion section. Another contribution Shah made to The Stillman Exchange was the creation of the "SOMA Spotlight" section, which highlighted local businesses and entrepreneurs in the South Orange/Maplewood area. As a volunteer with University Admissions as a Blue Crew tour guide, he gave prospective students a glimpse of the great resources SHU has to offer.

Dr. Steven Lorenzet, Associate Dean of Academic Services and Associate Professor within the Department of Management, has worked with Shah in various capacities: as a student in his class, as President of the SGA, and as a student who sometimes wanted to talk or seek advice. "Rishi has tremendous leadership qualities," claims Lorenzet. "He is collaborative, inclusive, and thoughtful. He is the type of person that is a joy to be around and makes people want to get involved."

Find Comfort in Discomfort
Shah believes that getting involved is the best way to grow and learn. To meet him now as a confident graduate, no one would imagine he was shy and reticent when he first set foot on campus.

"Get involved doing something you never thought you would do, something you're uncomfortable trying," Shah advises incoming freshmen. "Be comfortable being uncomfortable. It will help you to develop your strengths and give you courage to try new things."

He is grateful for the personal mentoring he received from the faculty and deans at Stillman. Even as far away as Seattle, Shah plans to give back to his alma mater. "As an alumnus, I want to stay connected with SHU. This community has given me more in personal and professional growth than I could have ever imagined!" he exclaims. "I am always here to speak to current and prospective students to share my unique journey and offer advice on how to make the best of their college careers."

Although Shah may not be physically here in New Jersey, he will hold his home state and Seton Hall in his heart — which he will do while gazing at a view of the Puget Sound, holding a cup of freshly brewed coffee and enjoying the "prime" of his life.