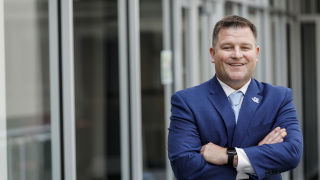 Price's career is steeped in more than 20 years of distinguished leadership experience, including serving in multiple levels of command, ranging from leading combat troops in Iraq and Afghanistan to serving as an associate professor in the Department of Social Sciences at the U.S. Military Academy at West Point, considered the world's premier leadership development institution. In his most recent role, he directed the Combating Terrorism Center (CTC) at West Point, an internationally renowned research and education center with global influence.

"Dr. Price is a perfect fit for Seton Hall because he possesses all of the key attributes that we value. He has all of the academic credentials, a passion for research as well as an extensive expertise in leadership and executive education," said Karen Boroff, Ph.D., interim provost.

Price earned a B.S. in U.S. history from West Point, an M.A. in international relations from St. Mary's University, and an M.A. and a Ph.D. in political science from Stanford University. His knowledge and expertise in terrorism, counterterrorism, U.S. national security and leadership have resulted in his briefing senior United States government and military officials throughout his career, including members of Congress, secretaries of defense, directors of the CIA and FBI, and numerous combatant commanders. His new book, Targeting Top Terrorists, is scheduled for publication in January 2019 by Columbia University Press.

Price is the recipient of numerous military commendations including the Legion of Merit, two Bronze Stars, three Meritorious Service Medals and two Air Medals. His professional affiliations include the American Political Science Association, International Studies Association, Marshall Center for Security Studies Alumni as well as serving as term member of the Council of Foreign Relations (2010-2015).

"Leadership is 100 percent a necessary skill set," said Price. "Our world is so complex but also so integrated that we need leaders in all types of disciplines. This is one of the unique aspects that this program brings to bear. It's those light bulb moments when we might be talking about an aspect of leadership in diplomacy and where that nursing student will say, 'Wait a second. I can apply that concept in my own realm.' That's where the magic is already happening."

He added, "The concept of leadership can sometimes be intimidating to people, particularly to younger people. If they don’t necessarily have some special skill or superpower in academics or on an athletic field, they feel that they can't be a leader. That's one of the things we're trying to dispel with our program. Are leaders born or are they made? Just as with other traits, some people are born with leadership capability, but I also know that a capability can be taught and developed in all of us."

The Institute's innovative four-year certificate program focuses on purposeful and strategic development of critical competencies or pillars of leadership development: character, civic engagement, change management, ceaselessness, collaboration, conflict management and courageous communication. It is the first interdisciplinary undergraduate leadership program of its kind in the United States, and one of only a few undergraduate programs that develop core competencies in specific pillars.

The program breaks down barriers between academic disciplines, enabling participants to develop these critical leadership pillars regardless of where they are in their leadership journey, no matter the student's current major or future career goals. The Buccino Leadership Institute has established distinctive leadership centers in the University's College of Arts and Sciences, College of Communication and the Arts, College of Education and Human Services, College of Nursing, School of Diplomacy and International Relations, and the Stillman School of Business. Each college or school will be the thought leader for a specific pillar based on the philosophy and work of that academic discipline.

Price also expressed his excitement in the program's potential and its unique focus. It melds the foundations of leadership with very nuanced discipline-specific leadership development. For students, it's an incredible opportunity to help illuminate their abilities and achieve greatness as they collaborate and learn as a team together, whether their expertise is business or communication, the humanities or the health professions, diplomacy or education.

To learn more, watch Steve Adubato interviewing Bryan Price on "One-on-One" on PBS on the importance of leadership skills for future generations of leaders.