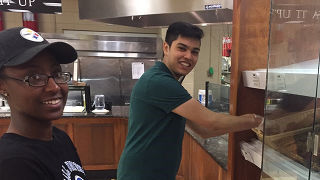 The Food Recovery Network at Seton Hall University has donated over 1,500 pounds of food to those in need since its inception in February 2017.

Seton Hall's chapter is now the second largest donor of recovered food among all the other colleges in New Jersey involved in the organization. The program's first year's bounty at Seton Hall provided more than 1,100 meals with food that otherwise would have gone to waste.

The Food Recovery Network is a nationwide movement against food waste and hunger started and operated by students. Seton Hall students involved with this organization on campus take food that is left over in the cafeteria at the end of each day and bring it to the House of Love Soup Kitchen in Newark, and Bethlehem Community Church in East Orange.

With regard to the students' performance since the chapter first began in the spring, Hannah Cather, program manager at the Food Recovery Network headquarters stated, "They have done an incredible job since they were founded, and we are very proud of the work they have done."

Gourmet Dining Services CEO, Al Frungillo, agreed, "I've been involved with Seton Hall for 30 years and I've seen so many amazing things done for charity, but I have never seen a more dedicated group than this group. They're taking four days out of their week to be involved with the recovery efforts, and I've never been more impressed."

Frungillo explained that the students come to the dining hall two nights a week after it closes and the workers are done for the day. The students then weigh the food, mark it, and store everything away. The next day they come and take the food, put it in their cars and deliver it to their partners.

The organization's executive board on campus is composed of approximately 10 students, including Andrew Aguilera, a senior from Parsippany, New Jersey, who founded the Seton Hall chapter. He started it in his junior year as a part of a mentorship initiative in the Gerald P. Buccino '63 Center for Leadership Development of the Stillman School of Business. Aguilera stated that he wanted to help resolve the food waste issue, and found the Food Recovery Network after doing some research. He spoke with other New Jersey chapters, created a team and pitched the program to Gourmet Dining Services, which promptly agreed.

Aside from the leadership team, there are about 30 students also involved with the program on campus.

Michael Reuter, director of the Gerald P. Buccino '63 Center for Leadership Development, said "These students are role modeling the highest principles and values of servant leadership of our Buccino Center and our beloved Seton Hall. We applaud and congratulate them for their vision, passion and their partnering with Al Frungillo's Gourmet Dining Services team to feed the hungry in our community. Theirs is the stuff of Seton Hall's leadership greatness." He continued, "What they do is God's work, a modern-day version of the loaves and fishes— turning what would have been disposed of into meals for those in need through their love and hard work. We at the Center are truly proud of their efforts."

Frungillo concluded, "I tell everyone this story because of how I feel about it. I do very little, I support it and I just watch the students. They are here to get an education and they are putting four days a week here with us, it is just amazing."