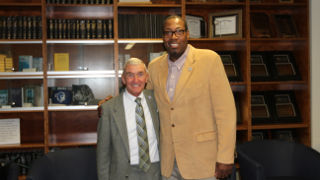 Michael Reuter, director of the Gerald P. Buccino '63 Center for Leadership Development, has been selected to receive the Leo Zatta Award from Team Walker at its annual gala, the "Evening of Dreams," in October.

Reuter will be receiving the award, which is named after the chairman of Team Walker's Board of Directors and member of the Seton Hall Board of Regents, Leo J. Zatta '78/M.B.A. '84/M.S. ’86. Zatta's longstanding dedication to Team Walker has distinguished him from his colleagues and is celebrated by attributing his name to this annual award. In searching each year, Team Walker selects a recipient who exhibits the same level of commitment and service to the organization as Zatta has in the past to receive the Leo Zatta Award.

Throughout his time as director, Reuter has worked with many executives and professionals from various industries. Among those whom he has worked with is Jerry Walker '03, Seton Hall University basketball legend, Stillman Entrepreneur Hall of Fame inductee and founding president and CEO of Team Walker.

Team Walker's mission is to "improve the quality of life for the children of Jersey City." The organization seeks to empower inner-city youth by offering after-school and summer programs that teach sports, academics and life skills.

Nearly 10 years ago, Reuter received a call from Nicholas R. Scalera '63, a celebrated alumnus, champion of the public service sector and founder of Scalera Consulting Services for at-risk children. Reuter was informed of a fundraising issue Team Walker had encountered and responded by introducing his leadership students to Jerry Walker to brainstorm solutions. The students created a 50-page report including recommendations to solve the problem. Upon implementing the recommendations, Team Walker exceeded its fundraising goals.

Since then, the Buccino Center and Team Walker have collaborated on numerous projects to build capacity for the organization.

Reuter has served as the director of the Buccino Center since 2007 and has helped many student leaders prepare for successful careers. The center boasts a 100 percent placement rate upon graduation of its leadership students, many of whom have gone on to work for BlackRock, PricewaterhouseCoopers, Deloitte and other well-known companies. Additionally, under the direction of Reuter, the Buccino Center also earned, for the fourth year in a row, a #1 ranking in the LEAD Awards sponsored by HR.com, establishing itself consistently as the best certificate program with an emphasis on leadership and organizational development in the nation.

Kevin Cummings, CEO of Investors Bank and fellow awardee, jokingly, but accurately, refers to Reuter as "The Connector" because of his ability to introduce the right people into a situation to solve a problem. Among these people include leadership student Taylor Salomon, who was recognized for her outstanding service to Team Walker. Salomon was tasked with redesigning the organization's website and incorporating new technological platforms to address issues of efficiency in the workplace.

"I have known Michael for ten years, and he is a truly kind and caring man. He goes beyond the call of duty in his service to Team Walker, and I appreciate the work he and his students have done for us," said Walker. "It is because of him and his team that Team Walker secured an essential grant through the Department of Education. That money helps us to continue in the pursuit of improving the lives of Jersey City children."

"This award is evidence of the hard work and dedication of all those who are a part of the Buccino Center," said Reuter. "To the members of the program's executive advisory council, the leadership students, alumnus Jerry Buccino and all those who made this program successful, this one is for you."