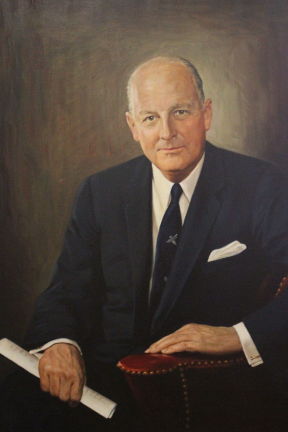 W. Paul Stillman headed two of New Jersey's largest financial institutions and is considered to have been Newark's private sector leader for nearly a half century, from the late 1930s to the 1980s.

Born in Newark, Stillman began his business career in the banking industry, first as a messenger with a New York bank and then in New Jersey through the developing bank regulation agencies of that era. He was so successful as an examiner that in early 1931 he accepted an officer's position at Newark's Fidelity Union Bank, and later that year as president of Newark's National State Bank – becoming America's youngest bank president.

It was the latter that Stillman would build into the institution that would be formidable in the state, first as First National State and then as First Fidelity.

In 1938, he was named to the board of directors of the Mutual Benefit Life Insurance Company, one of the 20 largest insurance companies in the country. In 1946 he became its chairman and chief executive, posts he held simultaneously with his positions at First Fidelity until his retirement from Mutual Benefit Life in 1978.

"If you wanted something important done in New Jersey, his office was your first stop."

Stillman utilized the firm's influence in the 1950s and 1960s to revitalize the area surrounding Newark's Washington Park. His influence also brought other important development to the park area, as well as the launching of the giant office complex, Gateway-Newark.

He was also influential in helping to get a series of laws passed that eventually permitted banks to do business around the state, allowing consumers to shop at dozens of institutions for the best yields on their savings deposits and the lowest loan rates.

In recognition of his accomplishments, and the financial contributions to Seton Hall University made by Stillman, Mutual Benefit and First Fidelity, the University named the school of business, the W. Paul Stillman School of Business in 1973.

"He was the epitome of the civic-minded businessman.  His own personal standard was to make business profitable. But he realized that his business was also an integral part of the society in which it was functioning."
- Fred Kelly, The Business School's Dean at the Time of the Naming

At the time of his death in 1989, Stillman was also director emeritus of Tri-Continental Corporation of New York and honorary director of the Union Camp Corporation. He had also served at various times as director of Food Fair Stores, Inc.; C.F. Mueller Co.; Becton, Dickinson & Co.; Public Service Electric & Gas Co.; Niagara Fire Insurance Co.; the Erie Lackawanna Railroad; Franklin Savings Bank and the Hospital Service Plan of New Jersey. He was the founder and past chairman of the New Jersey Heart Association, chairman of the Cancer Institute of New Jersey, chairman of the United Hospitals Medical Center Foundation, trustee of New York University and honorary life member of the board of directors of the New Jersey State Chamber of Commerce.

Excerpted from The Famous, the Familiar and the Forgotten: 350 Notable Newarkers by Guy Sterling (essay written by Andre Briod) and from a New York Times article written by Alfonso A. Narvaez, published on May 2, 1989.
Back to top