The Next Generation: Will the Holocaust Story Survive? 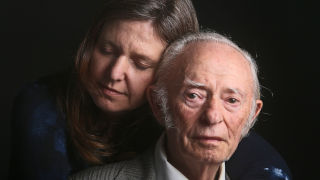 What will happen to the stories of Holocaust survivors and liberators, once they are no longer among us? How will the lessons of the Holocaust live on from one generation to the next?

From 2- 4 p.m. on Sunday, November 4 in Bethany Hall, the Sister Rose Thering Fund for Education in Jewish-Christian Studies will seek to address these critical questions. Join the Fund for its Eighth Annual Dr. Marcia Robbins Wilf Lecture, "The Next Generation: Will the Story Survive? A Panel of Third Generation Voices Responds."

The interactive lecture features a panel of third-generation Holocaust survivors – Manya Gaver, Jonathan Hanlon, Alexa Joachim, Amanda Lanceter and Orin Wilf – thoughtful young men and women whose grandparents experienced first-hand the trauma of the Holocaust either as victims or liberators. They will share their thoughts on how their family history impacts them and will explore their and our responsibility to remember and act in the turbulent times of the present and into the future. Leading the panel discussion is Michael Rubell, director of Michael Rubell Holocaust Remembrance Journeys. The audience will be encouraged to pose questions to the panelists during the event, which is free and open to the public through the generosity of the Dr. Marcia Robbins Wilf Lecture Endowment. R.S.V.P. by October 29.

About Michael Rubell
Michael Rubell is the son of Morris and Elaine Rubell and the exuberantly happy husband of Lisette and father of Jonathan. His father of blessed memory was a Holocaust survivor, which has played a huge part in his being sensitive to the needs of those less able to speak for themselves. Upon his father’s passing in 1995, Michael created Morris Rubell Holocaust Remembrance Journeys to further the work of his father in teaching tolerance and acceptance by personally bringing middle and high school students to the United States Holocaust Memorial Museum in Washington, D.C. Since 1996, over 5,000 students and educators have participated in these Remembrance Journeys.

Manya Gaver
Manya Gaver is a native of New Orleans, Louisiana, currently living in New York with her grandmother, Luna Kaufman, a Holocaust survivor. She is a student at Hunter College studying French, Italian, and Vocal Performance.

Alexa Joachim and her grandfather

Alexa Joachim
Alexa Joachim graduated from the University of Hartford in 2017 with a major in education. She is currently working in human resources at the Civil Service Commission in Trenton. She is the proud granddaughter of two Holocaust survivors: both her paternal grandfather who survived Auschwitz and her maternal grandfather who survived the Holocaust in France. Both grandfathers came to the United States after Europe was liberated.

Jonathan K. Hanlon
Jonathan Hanlon grew up in Watchung, NJ. He attended Seton Hall Prep (2011) and Fordham University (2015), where he majored in marketing. Currently he lives in Jersey City, NJ, and works as a software sales representative at IBM. His grandfather served in the 11th Armored Division for the United States and took part in liberating Mauthausen Concentration Camp.

Amanda Lanceter and her grandmother

Amanda Lanceter
Amanda Lanceter is the senior manager for curriculum and instruction at the Museum of Jewish Heritage – A Living Memorial to the Holocaust in Battery Park City, New York, where she has been a full time member of the education department since 2012. Before joining the Museum, she was a New York City Teaching Fellow at the College of Staten Island High School for International Studies, where she taught students with disabilities. As a college student, she interned at both the Museum of Jewish Heritage (where she was a Lipper Intern) and the Holocaust Council of MetroWest. She received her A.B. from Barnard College, Columbia University, and her M.S.Ed. from Brooklyn College, CUNY.

Orin Wilf
Orin Wilf is a real estate developer and the founder and president of Skyline Developers, a division of Garden Homes, a company founded by his grandfather, Harry Wilf, a Holocaust survivor from Poland. Orin, an avid baseball and sports enthusiast, has two sons and lives in New York City. He is a graduate of Roger Williams University in Rhode Island and the proud son of Dr. Marcia Robbins Wilf.