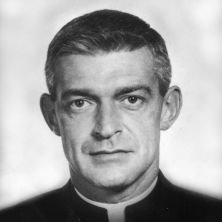 The power of courage and compassion comes to the screen in a newly released documentary, The Field Afar, recounting the story of Military Chaplain Vincent Capodanno. Father Capodanno was known for his bravery and life of service, accompanying his Marines on combat missions, a reassuring and consoling presence in often harrowing situations. Known as the "Grunt Padre" because of his ministry to Marine "grunts" in Vietnam until his death on September 4, 1967 while saying last rites to a dying Marine during Operation Swift, he was posthumously awarded the Medal of Honor for his heroic actions.

William J. Connell, Professor of History and Joseph M. and Geraldine C. La Motta Chair in Italian Studies and Thomas Rzeznik, Associate Professor of History and co-editor, American Catholic Studies, are among those interviewed by filmmaker Tim Moriarty. Released by Castletown Media partnering with the Interfaith Broadcasting Commission, the documentary airs to select ABC-TV affiliates around the country through January 2020.

"The life story of Maryknoll Father and Navy chaplain Vince Capodanno speaks to crucial elements in Italian American and American Catholic identity, which is why, fifty years later, his self-sacrificing service on the battlefield continues to resonate today," said Connell.

As a historian of American Catholicism, Rzeznik was asked to speak about the Catholic culture that Father Capodanno experienced as he came of age in the 1940s and 50s. It was a period marked by Catholic confidence and a sense of global mission. Like many young men of his generation, Father Capodanno was drawn to the priesthood because it offered an opportunity to serve the church and make a difference in the world.

The documentary's title, The Field Afar, was taken from the promotional magazine published by Maryknoll, explained Rzeznik. It was intended to cultivate support for the order's missionary activity. It also inspired many young men to join the community. With pages full of stories about the great work being done by Maryknoll priests in China, the Far East, and other exotic locations, it spoke to those looking for adventure. It attracted those who wanted to see the world and serve the church at the same time.

"It was an honor to be part of this documentary project and to help draw attention to Father Capodanno's remarkable life. Here's a candidate for sainthood whose story started just a few miles from campus, over on Staten Island," said Rzeznik.

The Vatican began an official investigation into Father Capodanno's life for possible canonization and sainthood in 2006.

"One of the steps towards sainthood is recognition that a person has demonstrated 'heroic virtue'. Father Capodanno's life reveals exactly that. In answering the call of duty – first as a Maryknoll missionary and then as a military chaplain – he risked his own life in service to others," said Rzeznik.

Click here to see the trailer and learn more about the movie, produced and directed by Tim Moriarty of Castletown Media and Jake Ehrlich of Reel Hound Media.

Watch an interview with filmmaker Tim Moriarty on CatholicTV.