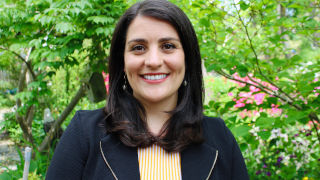 The National Association of Social Workers – New Jersey Chapter (NASW-NJ) has spoken. Over the summer, its members chose Widian Nicola, D.S.W., LCSW, assistant professor in Seton Hall's Master of Social Work program, as their new president-elect. Her three-year term – comprised of one year as president-elect and two years as president – officially began July 1.

Nicola's election to the NASW's second-largest chapter in the nation marked some particularly significant milestones. Not only is she the first Seton Hall professor to be elected while actively teaching at the University, but she is also the Chapter's first Arab-American president-elect.

"My hope is to support the already incredible work that's being done at the Chapter office," says Nicola. "In addition, my main priority is to creatively unite, galvanize and engage New Jersey social workers in local and state-wide policy issues related to poverty, racism, and immigration."

Nearly a third of the way into her first year, Nicola has already put her plan into action. In July, she and the Chapter's executive director led a pair of NASW-NJ webinars on social work and advocacy. These webinars culminated in two days of virtual action on July 28-29, during which members leveraged what they learned through the webinars to make phone calls to their local, state and nationally elected officials to advocate for police reform. And later this month, she is leading a webinar titled "Human Rights Violations: Forced Sterilization of Women of Color in America" as part of the Chapter's Race, Responsibility and Reconciliation Series.

"The hope is to create tangible, practical opportunities for the social work community to become more involved in policy, technology, advocacy and more," says Nicola.

Nicola is also expanding her reach outside the NASW-NJ, establishing herself as a thought leader throughout the state and beyond. She recently wrote a featured op-ed published on NJ.com entitled "Sterilizing Immigrant Detainees Must Stop Now." Additionally, starting in June and continuing through the start of her term, she launched "The Lived Experience Project: Being Black in America," a Facebook Live series that Nicola hoped would help shift the narrative of racism in the United States. The series was built from Nicola's "Lived Experience Project" podcast series, which "explores unique and evocative narratives rarely heard in mainstream media." Each season focuses on a lesser known and marginalized population and how these oral histories unveil the often complex nature of the shared human condition.

Even with all these achievements under her belt, Nicola is only just getting started. "In my role as president-elect, I'm actively learning more about the role of board president, clarifying the direction of position, and, alongside the NASW-NJ executive director, envisioning what the future of the organization can look like and what initiatives we'd like to take on," she states.

"There is much to be done, and I'd like to push for social workers to be at the front of the many social justice issues."