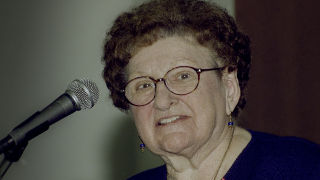 The Sister Rose Thering Fund for Education in Jewish-Christian Studies is celebrating its 25th anniversary this year. Since its inception, the Fund has provided tuition assistance for educators studying in the graduate program of Jewish-Christian Studies in the College of Arts and Sciences. This year, the Sister Rose Thering Fund invites the Seton Hall community to commemorate Sister Rose’s Yahrzeit, the Jewish practice of commemorating the anniversary of a death, at 1:00 p.m. on Sunday, April 29 in the Seton Hall Rose Garden.

Sister Rose Thering was a religious sister of the Dominican Order and an activist who dedicated her life to fighting anti-Semitism. She left a notable impact on Seton Hall's history and mission through her doctoral research into how Catholic teaching materials of the time portrayed Jews.

In 1968, Sister Rose Thering joined the Seton Hall faculty. There, she established lessons on Judaism for Church leaders and teachers, and led student groups on 54 tours of Israel. She was committed to connecting similarities between Jews and Christians and building bridges between the two.

The Sister Rose Thering Fund works diligently to continue recognizing Sister Rose's impact on the University's mission. The Fund was created to bring further awareness and understanding among Jews, Christians, and those of other religious traditions through advocacy and education. It specifically educates teachers in implementation of the New Jersey Mandate on Genocide and Holocaust Education to help fight prejudice through education.