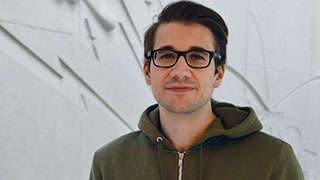 Grigoriy "Grisha" Shekhtman, a senior psychology major at Seton Hall University, has been awarded a $3,000 Novartis Science Scholarship to study the relationship between social media and alcohol abuse in young adults. He will conduct this research alongside Sulie L. Chang, Ph.D., professor in the Department of Biological Sciences and director of the Institute of NeuroImmune Pharmacology.

Grisha, who hails from New Milford, New Jersey, is a student in the five-year B.A., Psychology /M.S., Experimental Psychology program and has had an interest in the consequences of social media throughout his time at Seton Hall.

"During my sophomore year, I worked in the psychology lab of Dr. Paige Fisher, learning about the harmful combined effects of social media and alcohol use in college students and teens," said Grisha. "Social media research is a relatively new field, but there is so much that is unknown about it — even though almost everyone is on social media. That's why it's so important to research and understand the consequences that come from using it."

This year, Grisha joined Dr. Chang in her on-campus lab at the Institute of NeuroImmune Pharmacology. While she is a biology professor, she embraced Grisha's talents as a researcher, regardless of his major. "Having a student from a different scientific field brings a different perspective to the lab, which is always helpful."

Chang had only been working with Grisha for a few weeks when she sponsored him for the Novartis grant. "Grisha has excellent communication and critical-thinking skills, all of which are critical characteristics of a successful researcher," said Chang. "It is his hard work, dedication and passion that led to me to sponsor him for the grant."

In regard to the goals of the project, Grisha explains, "This research will most likely not involve participants, but rather serve to discover findings in literature about the relationship between social media and alcohol use in teens and young adults. My hope is to develop a strategy or skill to help alleviate any harmful relationship between social media, mental health and problematic behaviors."

After conducting this research and completing his graduate thesis (which is separate from this project but also related to social media), Grisha aims to build a career "in a research field where I can continue to investigate mental health and behaviors, and hopefully develop therapeutic processes to aid people struggling with mental health issues or problematic behaviors."

Grisha acknowledges that this is a large goal, and he will need to put in a lot of work and effort, but remains optimistic. "I believe that what I am doing is going to one day help others and that makes all the effort worth it."

The Novartis Science Scholarship recognizes and rewards rising junior or senior science majors engaged in research at ICFNJ's member colleges and universities by awarding scholarships to qualified students. Entrants must have a cumulative minimum GPA of 3.5 or better and submit a brief explanation of a scientific research project being conducted in the coming academic year. More info, click here.