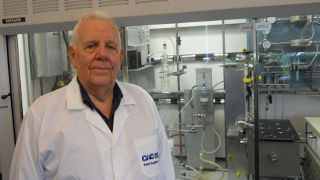 "I think I was born a chemist. I had my first chemistry set when I was seven years old, and I was convinced ever since that I would become a chemist."

Fast forward to 2018. Robert Augustine, Professor Emeritus of Chemistry and Executive Director of Seton Hall's Center for Applied Catalysis, has built an impressive career off that very first chemistry set. He is a founding member of the Organic Reactions Catalysis Society (ORCS), which, according to its mission statement, aims to "advance practical applications of catalysis for making organic compounds by fostering discussions, providing opportunities for members to present their work, and facilitating dissemination of scientific knowledge." Every two years, the ORCS holds a conference for all its members to build relationships, discuss technological breakthroughs and share expertise. They then publish the conference proceedings as a resource for the scientific community. 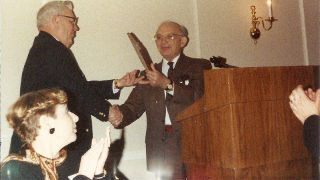 Augustine received the ORCS' Rylander Award in 1990 from the society's chairman, William Pascoe.

Recently, the ORCS initiated a new award – which they have named after this distinguished chemist.

The Robert Augustine Early Achievement Award will be given every two years to a scientist or engineer under 40 years of age, just starting out in his/her career, who has made significant contributions to the use of catalysis in organic reactions and demonstrates great leadership potential in the field. The award includes up to $1,500 in travel expenses to the biennial conference, a commemorative plaque, and a $2,000 prize which can be used to fund research, travel to additional conferences or any other expenses that can help advance the recipient’s career. "It's a wonderful way for these young individuals to be acknowledged for their achievements, and it also provides good networking opportunities for those who receive the award," says Augustine. 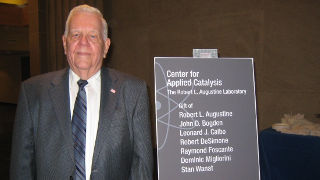 The Center for Applied Catalysis held a lab dedication for its new Robert L. Augustine laboratory in 2008.

One might say it would certainly behoove these up-and-coming scientists and engineers to take advantage of opportunities to network with ORCS members such as Augustine, who earned his doctorate in 1957 from Columbia University for research in the area of natural product syntheses. His subsequent research has ranged from catalytic hydrogenation, to synthetic organic chemistry, and finally to heterogeneous catalysis in synthetically useful reactions, which has been his primary focus for the past 45 years.

Since coming to Seton Hall in 1961, the research he has supervised has led to the writing of 37 doctoral dissertations and nine master's theses. He has also published more than 130 research articles, 10 books, 17 patents and several chapters in the areas of organic synthesis, mechanism and utilization of catalytic hydrogenation, and catalyst comparisons, among others. As Executive Director of the Center for Applied Catalysis at Seton Hall, he spearheads collaborative research with industry on issues involving catalysts. In the 20 years since the Center was founded, they have partnered with approximately 35-40 different companies, including DOW Chemical and Eli Lilly, surpassing $7 million in contracts. "Lately we've been working with a lot of start-up companies because we have facilities they don't yet have," says Augustine. "Right now, we're working with a firm based in China to produce materials similar to petroleum that are obtained from sustainable biomass.  Our research is always concerned with both the environmental and economic aspects of any process which we develop."

What is catalysis? Simply put, catalysis is a modification to the rate, temperature, etc., of a chemical reaction by a material that remains chemically unchanged at the end of the reaction. One example of real-life applications of catalysis is the use of catalytic converters, which transform pollutants in a car's exhaust into less harmful substances.

Along with his peers in the industry, Augustine co-founded the ORCS in 1965. It now consists of approximately 300 members from the United States, Europe and all over the world. "The majority of our members are industrial chemists, but we have some academics as well," says Augustine. "But regardless of where they come from, they are all prominent in the field. Our members have included Nobel Prize winners, editors of prestigious journals and many other well known, well respected leaders in catalytic research."

This year's ORCS conference will be held in San Diego, California, for four days in April, and in attendance will be the very first recipient of the Robert Augustine Early Achievement Award – the first of many brilliant young minds to be recognized for their achievements in the years to come. What began as a child's chemistry set has evolved into a prestigious recognition honoring the scientific leaders of tomorrow.