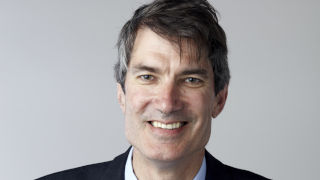 Sir Steven C. Cowley, director of the Princeton Plasma Physics Laboratory at Princeton University (PPPL), will present "Bringing Down the Cost and Scale of Fusion Energy" as the Fr. Stanley L. Jaki, O.S.B. Distinguished Lecture at the 2019 Petersheim Academic Exposition.

Cowley is a theoretical physicist and international authority on fusion energy. He serves as the seventh director of PPPL, a Department of Energy national laboratory considered the preeminent research facility investigating nuclear fusion energy and basic plasma science. Prior to serving as the lab's director, Cowley was president of Corpus Christi College and professor of physics at Oxford University.

Before teaching at Oxford, Cowley was chief executive officer of the United Kingdom Atomic Energy Authority and head of the Culham Centre for Fusion Energy. Cowley earned his doctorate at Princeton University in astrophysical sciences and was a staff scientist at PPPL from 1987 to 1993. He has been a member of the U.K. Prime Minister's Council for Science and Technology. He is a Fellow of the Royal Society and of the Royal Academy of Engineering and was knighted by the Queen of England in June 2018 for his role in fusion science.

"We are extremely honored to host Professor Cowley here at Seton Hall," said Professor Jose L. Lopez of the Department of Physics. "He is a world-renowned physicist and the world's leading authority on fusion energy. Given the profound impact of Fr. Stanely Jaki's ideas on understanding of the workings of the universe, it is unquestionably fitting that Professor Cowley, one of world's leading thinkers on the future of human civilization and its energy needs, should be this year's Jaki Lecturer."

Cowley will deliver the lecture named in honor of Fr. Stanley L. Jaki, O.S.B., a world-renowned author, physicist, philosopher and theologian who served as a Distinguished University Professor of Physics at Seton Hall from 1975 until his death in 2009. 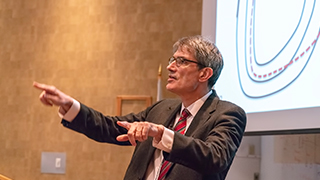 Recently, Jaki was featured in Aleteia as one of five Catholic scientists that "Shaped our Understanding of the World." The other four scientists are Copernicus, Father Gregor Mendel, Father Giuseppe Mercalli and Father Georges Lemaitre, who are responsible, respectively, for: our understanding that the sun is at the center of the universe; the experiments with pea plants that led to the discovery of hereditary trait patterns — the foundation of modern genetics; a seismological scale that accounts for human impact; and the development of the Big Bang theory.

Cowley's laboratory in Princeton focuses on the study of fusion energy and plasma physics research and is said to be developing the key innovations requisite to realize fusion as an energy source for the world. In recent years, a number of Seton Hall students have worked and studied at the PPPL.

Seton Hall is one of only a handful of Universities across the globe doing basic research on plasmas and pioneering various plasma technologies and applications. The Laboratory of Electrophysics and Atmospherics Plasma (LEAP) in the Department of Physics, directed by Prof. Lopez, has demonstrated and developed cold plasma technologies for clean water treatment and environmental remediation. Recent scientific investigations at LEAP discovered that cold plasma treatment of agricultural plants leads to enhanced plant growth — this approach has come to be thought by many to be a scientific breakthrough with potentially major implications for feeding the world.

The Fr. Stanley L. Jaki, O.S.B. Distinguished Lecture will take place on Wednesday, April 24 from 6-7 p.m. in SC 101, McNulty Hall. The annual lecture is a part of the Petersheim Academic Exposition. Every year, the Exposition celebrates the scholastic accomplishments of faculty, students and administrators across disciplines.

The theme of the 2019 Petersheim exposition is, "Share. Honor. Unite."