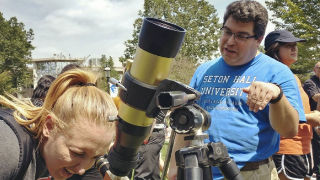 Physics Professor Jose L. Lopez understands the implications of The National Academies of Sciences, Engineering, and Medicine identifying the major global challenges in the 21st century that science and technology must help solve: energy and the environment, global health, water resources, agriculture and food security, international security, population and human rights. As the University celebrates the importance of sustainability and the encyclical of Pope Francis, Laudato Si': On Care for Our Common Home, Lopez recently discussed how he and his colleagues and research students are dedicating themselves to these issues.

On April 8, in an interview with Ira Flatow, NPR Science Friday host, Lopez discussed this critical research and how the emerging field of plasma agriculture and The Future of Sustainable Farming Could Be Cold Plasma could make a difference.

Sharing his excitement, Lopez said, "I mean, if you look at stars, Carl Sagan used to say all the time we are star stuff. And that’s absolutely true. Everything that we're made out of, carbon and all of those elements on the periodic table, were formed inside a plasma, inside a star that became unstable and blew up as a supernova and created all of this that eventually, of course, formed into the Earth and eventually formed into living organisms like us. So it's all connected. I mean, we're just starting to scratch the surface of understanding it."

He continued: "Plasma is the spark of life, the spark of all existence. Plasmas provide some potential solutions to many of our global challenges," explained Lopez, who also serves as Program Director in the Plasma Physics Program in the Division of Physics at the National Science Foundation (NSF).

Plasma is considered a state of matter—alongside solid, liquid and gas—and more than 99 percent of all visible matter in the universe is assumed to be in plasma form. Basic research in plasma physics at Seton Hall particularly in the Laboratory of Electrophysics and Atmospheric Plasmas (LEAP) has been increasing, especially emergent is applied plasma research in the area of agriculture. Cold plasma is being tested as a way to speed up plant growth and make fertilizer that is better for the environment.

"The future of sustainable farming could be cold plasma," said Lopez. "We don’t like what common fertilizers do for climate change. Cold plasma could replace the Haber-Bosch process, which converts hydrogen and nitrogen to ammonia. It is considered by many one of the most important industrial chemical reactions ever developed. The process has made ammonia fertilizer widely available, helping cause a world population boom as yields from agriculture increased rapidly in a short time. But with cold plasma, instead of doing it at a large scale, you can bring it down to a corner of a barn or a small set up where you can create fertilizer without having to rely heavily on industrial chemicals and huge amounts of land."

Findings on the "Effect of Cold Plasma Process on Botanicals and Their Essential Oils" by Cosimo Antonacci, Rev. Gerald J. Buonopane, and Lopez were presented to the Institute of Electrical and Electronics Engineers (IEEE) International Conference on Plasma Science and published in Plasma Medicine, Vol. 6, Issue 3-4. Their work with Sweet Basil showed a 25 percent increase in growth with plasma treatment.

Plant body treatments use atmospheric cold plasma jets, where the biochemistry in the seed is stimulated. These researchers are currently seeking to pioneer 'plasma brushes' or plasma irrigation heads that would allow for sort of equivalent of water irrigation of plants, but with atmospheric cold plasmas for farming fields. This is still an ‘emerging state’ from the lab into the field, but definitely holds some promise, shared Lopez.

"And what we're seeing globally is that there's a migration of people away from rural areas and into these big cities. So I mean, one possibility of sustainability is growing foods in the cities. I mean, when you walk around different parts of New York City or my hometown of Newark, New Jersey, you see lots of land that is not being used for anything. So the possibilities you can do urban food growing, having farms in those locations. And this technology, this type of plasma technology is something that is sustainable. It's totally doable there. I mean, we have all the ingredients. We have air. We have electricity. It's perfect. It's a perfect technology for that movement you're talking about," explained Lopez.

Professor Lopez joined the University physics faculty in 2011 and is the founder and director of the Laboratory of Electrophysics and Atmospheric Plasmas (LEAP). His research group studies, develops, and applies a wide range of theoretical and experimental techniques to understand, predict, and design novel electron-driven processes to generate low temperature plasmas with applications in lighting, energy conversion, materials modification, and clean water technologies. This research has led to the development of various novel environmental remediation technologies, which use atmospheric and high-pressure plasmas to clean and remove contamination in air and water.

The research with ozone generation processes using microplasmas has led to substantial increased performance and optimization of large-scale industrial ozone generators used in municipal water treatment facilities all over the world. Most recently, Lopez has expanded his research interests into the areas of plasma catalysis for hydrogen generation and the use of atmospheric low temperature plasmas for agriculture applications leading to discoveries of growth enhancement in botanicals.

His applied and basic scientific investigations have garnered funding of over $4 million from various sources such as the Air Force Office of Scientific Research (AFOSR), Department of Energy (DOE), National Science Foundation (NSF), Army Office Research (ARO), National Aeronautical and Space Agency (NASA) along with various industrial partners and private research foundations. He is the author of more than 30 scientific publications including the book “Complex Plasmas – Scientific Challenges and Technological Applications. He earned a B.S. in Physics from Saint Peter’s University in Jersey City, New Jersey in 2000, an M.S. in Physics in 2003 and a Ph.D. in Physics in 2006 from the Stevens Institute of Technology in Hoboken, New Jersey.

To learn more and listen to the Science Friday interview, visit The Future of Sustainable Farming Could Be Cold Plasma.