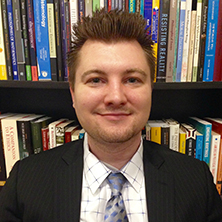 Professor Travis Timmerman appeared in The Washington Post and ABC TV News regarding controversy in our nation’s capital over a report calling for changes in sites and parks named after historical figures.

A committee reporting to D.C. Mayor Muriel E. Bowser has recommended renaming dozens of public schools, parks and government buildings in the nation’s capital — including those named for seven U.S. presidents — after studying the historical namesakes’ connections to slavery and oppression.

The report drew a torrent of criticism, especially for its suggestion of adding plaques or other context to some of the most famed federal locales in the city, including the Washington Monument and the Jefferson Memorial. After a harsh rebuke from the White House, the Bowser administration removed the recommendations dealing with federal monuments on Tuesday evening.

And that Philosophy Professor Travis Timmerman, "who has researched monument removals, said addressing the scores of places cited by the committee would put the District far beyond most U.S. cities, which have mostly focused on whether to remove public honorifics for Confederate icons."

"They’re going after historical figures that by and large have gotten a pass previously for their moral transgressions," Timmerman said, noting that the appropriateness of a monument changes over time.

"Thomas Jefferson, for instance, was a vicious slaveholder," Timmerman said. "But most people think of him as the primary author of the Declaration of Independence. … If that’s what people think of Jefferson, then it’s not necessarily harmful to have a school named after him. If people become more aware of his moral shortcomings, and that’s what they think of when they see Jefferson’s statue or a school named after him, well, then it becomes harmful."

Professor Timmerman’s main research interests are in normative ethics, applied ethics, and the philosophy of death. In normative ethics, he primarily focuses on the actualism/possibilism debate and axiological issues concerning the concept of "harm." He has written about the moral obligation of those vested with power to consider the impact and harm such monuments can cause in his article, "A Case for Removing Confederate Monuments," which appears in Ethics Left and Right: The Moral Issues that Divide Us (Ed. Bob Fischer, Oxford University Press). He has also presented on the issue at Seton Hall in a "Philosophy Talk" for students and faculty.

For ABC TV News, in a segment on the issue that was broadcast through dozens of affiliate stations, Timmerman remarked on the responses of the president and a number of Republican lawmakers that seemed to characterize the report as calling for the removal of various monuments.

"My understanding of the report is that it was never even a proposal to remove the Washington Monument and that rested on a kind of misunderstanding of what the committee wanted," explained Professor Travis Timmerman of Seton Hall University. "So, I think that knee-jerk reaction was unfounded."

Timmerman has been studying the movement and says, instead, some sites could be contextualized by adding signs or plaques to address criticisms of the Founding Fathers.