Professor Inspires New Citizens to Take Their Place in America 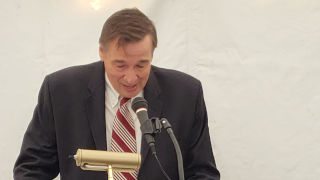 History Professor William Connell, Joseph M. and Geraldine C. La Motta Chair in Italian Studies, presented the keynote address at the swearing in of 32 new citizens at the Naturalization Ceremony at Thomas Edison National Historical Park in West Orange, on September 27. The event was hosted and organized by the Department of Homeland Security, U.S. Citizenship and Immigration Services, and the superintendent and park rangers at the Thomas Edison Historic National Park. 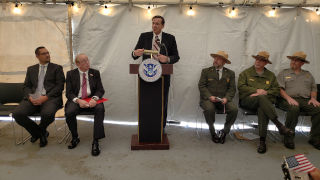 On behalf of the University, Connell presented a congratulatory gift of beaded necklaces and patriotic teddy bears to those with children. He discussed the history of citizenship, the importance of an ability to understand the knowledge and capacity for being governed as well as governing, and the privileges and responsibilities that come with the honor of being a citizen.

"Nowadays, citizenship so often seems to mean having papers, crossing borders, dealing with government red tape .…But there is also this older language of the citizen, which has special meaning in the United States, that conceives of our free men and women as people who should be prepared not just to take orders from their fellow citizens, but also to understand what it means to lead. This an idea that still beats strong in the hearts of the United States citizens whose numbers you are now joining," said Connell.

In discussing the privileges and responsibilities of being an American, he talked about planning, patience and voting in elections. "I hope you will vote regularly, and, perhaps when you vote, you could consider it a pledge or reminder that your name, too, could be on the ballot, and that someday, if not you yourselves, that your children or your children's children, may have the honor, as I hope they will, to serve your fellow citizens by holding office and governing to the best of your abilities," Connell shared.

He encouraged those gathered to celebrate the pleasure in being American by visiting the country's cherished sites and participating in American culture.

Connell concluded, "Listen to the blues in Memphis and to jazz in New Orleans. Go to the Rocky Mountains. Visit Yellowstone, see Yosemite and the Redwoods in California. Visit the Wisconsin Dells and the lakes in Minnesota. Marvel at Niagara Falls. See the cactuses in the vast Sonora Desert of Arizona as the sun sets. Drive to the top of Mount Washington in New Hampshire or to a mountain in Maine to see the sun rise. Today this land becomes your land. It's waiting for you."