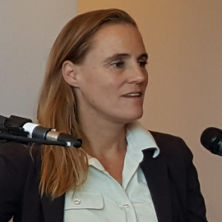 Elizabeth Brewer Redwine, who teaches English in the College of Arts and Sciences, is being honored with the 2018 Freedom Award from the West Orange Human Relations Commission and West Orange Township at the annual Martin Luther King Jr. Day Celebration on Monday, January 15, from 10 a.m. to noon at the Life Christian Church, 747 Northfield Avenue, West Orange.

Also being recognized for having their "hands on freedom" are West Orange residents Janice Johnson Dias, Lou Mignone and Eric and Monique Pryor. Tamara Harris is the keynote speaker at the community event, which is open to the public.

"We started with a unity walk between public elementary schools. This walk led to meetings in living rooms and, eventually, to a series of programs focused on bettering our community and supporting conversations around issues of justice, racism, and community," said Redwine, one of the founders of Essex Rising.

"Our group is committed to advocacy for those who often do not have a voice in our community and to providing a place for sometimes difficult but necessary conversations as well as help for neighbors who might need support," shared Redwine.

The group has gathered materials for families in need, led events for youth to discuss their responses to the election and to write letters to refugee families and engage in community service. They have raised money and goods for local shelters and food pantries; hosted candidates forums, and stood up for the rights of immigrant neighbors in conversations with the Essex County freeholders about conditions at the ICE detention center and in promoting resolutions to protect the rights of immigrant children and families in town.

The group organized a march and vigil with faith leaders in response to the violence in Charlottesville and a Unity Cookout with Black Lives Matter Newark, the Islamic Center of Passaic County, Wind of the Spirit immigration resource center and First Friends, an organization that helps families in detention. Ongoing postcard writing events have addressed issues of free speech in the wake of words that have been prohibited by the administration. Members have collected books, food, and supplies for Black Lives Matter Newark's ongoing books and breakfast program.

"As a lecturer in the English Department at Seton Hall, my community work extends to two Core II Christianity and Culture service classes that I am teaching this spring. I look forward to being able to bring service into the classroom at Seton Hall. In all of my teaching I am committed to an emphasis on exchanging ideas based on well-researched information in class discussions and in assignments in ways that respect different ideas and backgrounds," Redwine explained.

In addition to being an instructor in the English Department, Redwine is a member of the Board of the New Jersey College English Association. She is currently at work on an anthology of essays about the complicated but fruitful collaboration between Yeats and Tagore entitled Tagore and Yeats: A Postcolonial Re-envisioning as well as a book-length project on Yeats, Synge, and the actresses who performed and contributed to their plays entitled The Drama of Collaboration: Gender, Performance, and Authorship at the Abbey. Recent publications include "How Cathleen Became Mrs. Monihan: Sara Allgood's 'Grave Acting' and Irish Female Performance" in Cambridge University Press' New Theatre Quarterly and "The Big House in Flames: Constance Markievicz and Yeats' Response to the Rising" in The Chesterton Review. This month she presented at a panel on Irish Women's Political Writing at the MLA Conference in New York and she will be chairing a panel and presenting at the Montclair Literary Festival in March 2018.