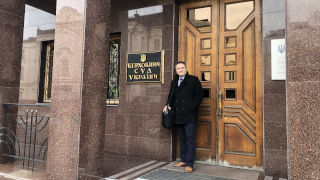 The New Justice program was established and designed to support, among other responsibilities, the judiciary's mission to serve its citizenry and society and to create and continually improve upon its administration to safeguard an independent, accountable, transparent, and effective justice system.

Fazari, a Fellow of the Institute for Court Management, who has served as faculty for the National Center for State Courts and a chief administrator for the New Jersey Judiciary, provided consultation for the developing democracy throughout 2019 in the areas of caseflow management and court performance standards. For this most recent project, Fazari was enlisted to provide guidance to the judiciary as it seeks to reform its jury trial process.

"One of the most important hallmarks of a democracy is the right to a jury trial," said Fazari. "It is a unique aspect of America's system of justice and the framers believed the right to be tried by one's peers was so essential that it warranted inclusion in the Sixth and Seventh Amendments of the Constitution. To the extent that I can contribute to Ukraine's justice system in these reform efforts, it is an honor to collaborate with them and be a part of that process." 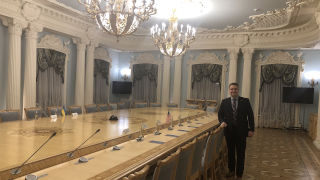 New Legislation
Recently enacted legislation in Ukraine seeks to develop a sound, more comprehensive model in which jurors participate in the judicial process and to improve the process by which jury lists are assembled. The legislation draws on the conventional practices of other nation states (and the United States in particular) that employ a jury trial model as a part of their criminal and civil procedure.

Legislation is one thing, but implementation is quite another. The State Judicial Administration (SJA) and Ministry of Justice (MOJ) of Ukraine sought advice and counsel on the formulation and processes associated with establishing and maintaining a traditional jury trial model in support of the legislation's principal goals — including the enhancement of the public's trust and confidence in the country's judicial system to reach fair and just resolutions.

Establishing Fair Inputs to Enable Fair Outcomes
Through the commitment of its justice partners including the SJA and MOJ, New Justice seeks to improve the legal framework from which jury services and operations are rendered for select cases in the Ukrainian judiciary and sought Fazari's consultation in three operative goals: first, recommending a jury list formation procedure for the SJA and its territorial offices; second, proposing the operational processes and functions regarding best practices for effective jury service management; and third, advising on the approach to be instituted in transitioning the jury management process from its present model to the traditional model including estimated costs of the changeover.

"This initiative is not unlike others I have managed over the course of my career in that the goals are straightforward, but God is in the details," said Fazari. "Ensuring fair outcomes from the judicial process requires fair and reasoned inputs along the way – procedure is key to the administration of justice, which Alexander Hamilton stated in Federalist 17, 'contributes, more than any other circumstance, to impressing upon the minds of the people affection, esteem, and reverence towards the government.' And given the current circumstances with which America is grappling, the checks and balances that the jury system provides in our justice system are clear. It is in this conscience of the community that safeguards us against excessive power exerted by the government or absolute power vested in any one individual."

Road Map for Justice
To that end, Fazari provided a road map in his analysis discussing the goals utilizing a four-phase approach (master source list development and maintenance, juror pool qualification and summoning, juror pool management, and post-service evaluation and assessment). He additionally provided an overview of a wide range of documents including flowcharts and recommended policies and procedures to instituting a traditional jury management model.

Among the other processes addressed with the New Justice team, he advised on the following:

Over the last several months, Fazari has further crystallized the processes and demonstrated the extent to which jurors are involved in a traditional model of administering justice. His overview into the basic operations and fundamental practices of a traditional jury model will serve as the necessary primer for operationalizing this critical transition in Ukraine.

A co-author of the recently published book, Historical Dictionary of American Criminal Justice, Fazari says he "is grateful for the opportunity" to actually play a part in "writing" Ukraine's history. "Due Process is the bedrock of justice," he said. "And to be in the midst of its history in the making has been nothing short of extraordinary."