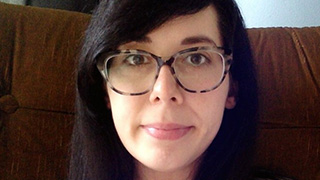 Professor Cara Blue Adams, who teaches creative writing at Seton Hall, published "The Common State of Matter" in Granta. Granta was founded in 1889 by students at Cambridge University and is currently considered one of the premier literary magazines and publishers in the world.

Adams, who was recently awarded an Emerging Writers Fellowship from the Center for Fiction and serves on the Breadloaf Writers' Conference admissions board, has published works in Narrative, The Kenyon Revue, Ploughshares, The Sun, The Rumpus and many other literary journals.

In Granta, Adams published "The Most Common State of Matter." A short story that depicts two young college professors facing the prospect of both cancer and marriage. Adams writes:

Over lunch, Kate's beautiful friend Josephine, with whom she taught at Louisiana State University, revealed that she was facing a health scare and needed Kate to drive her to a doctor's appointment for a procedure during which she would be put under twilight sedation. The fear was colon cancer, unlikely but grim. Jo was thirty-four, two years older than Kate, but Kate thought of them both as young, too young for tests. Girls, really. They were emerging writers-in-residence, shared a cramped office. Jo was a poet. She wore brown leather cowboy boots with rosy-hued cotton skirts, and was debating whether to get bangs. The engine of her car, an ancient gray Volvo with a broken side-mirror, was pretty much shot. The mechanics at the garage fixed it out of pity for her; they lost money on the repairs. Her life ran on charm.

Read more of "The Most Common State of Matter" in Granta.