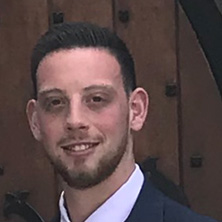 Chris was born and raised in New and Jersey and received his B.Sc. in Biochemistry from Seton Hall University in 2015. Towards the end of his undergraduate studies, he was introduced to the field of cancer gene therapy and worked as an undergraduate researcher performing synthetic organic reactions and characterization of modified nucleosides. After a short internship in the flavor and fragrance industry as a quality control technician, Chris returned to Seton Hall to pursue his Ph.D. in chemistry in Dr. David Sabatino's lab, working on expanding the scope of siRNA-based gene therapy. In doing so, he has also worked closely with Dr. Jenny Zilberberg, associate scientist at the Center of Discovery and Innovation for the Hackensack Meridian Health network, in implicating a novel role for GRP78 in the regulation of cell adhesion molecules in Multiple Myeloma and Prostate cancer. Chris has co-authored six publications, including two as lead author during his graduate career. He has disseminated his work at multiple local conferences including at the NYAS.

Gene therapy is a potent and versatile nano-medicine strategy in the treatment of cancer. Of the many tools currently used in this application, short-interfering RNA (siRNA) are among the most commonly employed due to their ability to silence oncogenic mRNA with high precision through the RNA interference (RNAi) pathway potentially leading to cancer cell death.

This work revolves around silencing the Glucose-Regulated Proteins (GRPs) whose expressions are upregulated in cancerous tissues and are implicated in the proliferative, pro-survival, and anti-apoptotic pathways that govern tumor biology. This seminar will discuss a variety of applications to improve the potency and functionality of GRP-targeting siRNAs while investigating the role of these oncoproteins in cancer cell cytotoxicity and adhesion.

Branched RNA templates have the ability to self-assemble into higher order siRNA nanostructures and are capable of delivering multiple siRNAs that can synergistically silence the GRPs in endometrial, breast, and cervical cancer. From the branched RNA templates, second generation bioconjugates were developed to include fluorescently labeled and fatty acid conjugated siRNAs in an effort to expand their functionality into theranostic and self-delivery applications.

The master GRP regulator, GRP78 plays a novel role in modulating the expression of N-cadherin, a mesenchymal marker pivotal in the progression of metastatic tumor cell adhesion to the bone microenvironment. Silencing of GRP78 ultimately led to a decrease in prostate cancer adhesion in a model bone co-culture system. This work highlights a method for developing cancer-targeting and cell penetrating peptides for the targeted delivery of siRNA to prostate cancer cells. Together, these studies demonstrate new technologies that can further enhance the potency and applicability of siRNAs in cancer gene therapy.

The Department of Chemistry and Biochemistry offers B.S., M.S., and Ph.D. degrees with specializations in all areas of chemistry. Our unique research environment, including traditional full-time students and part-time students is designed to foster collaborations with industry and colleagues in other disciplines. The Rose Mercadante Seminar Series is named for Rose Mercadante, the departmental secretary for over 40 years, in honor of our alumni, her "boys and girls".