What Great Minds Can Do: William Pindell 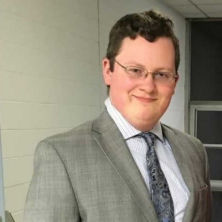 William "Bill" Pindell's ambitious academic journey at Seton Hall included majors in both History and Philosophy. He is participating in the five-year master's degree program, having graduated with a bachelor's in 2019 and next spring with a master's degree. He loves the streamlined nature of the program. Bill plans on continuing his education, pursuing a Ph.D. in History and teaching military history at the college level. He was part of the Honors Program and served as the treasurer of the History Club and a member of the Philosophy Club.

Could you describe your final project?
My topic relates to American misconceptions of Austria during the interwar period. I tried to bring more attention to Austria's importance in the events leading up to World War II. My method was to analyze which popular and official American views were and how they were selectively informed with regards to the looming specter of the Anschluss and Austria. I argued that Americans have not understood Austria without an understanding of Germany, and that it is an inadequate way to view, not simply Austria, but other nation-states as well. Austria was (and arguably, is) a vital player in the development of Eastern European affairs; it is not just "the other Germany." Austria is a unique case of sharing a language but slightly different values with Germany. It is a crossroads which has been viewed as a bulwark against Communism, a hot bed of intellectual radicalism and a complex nation-state still grappling with its national identity.

Could you describe your research process?
I did some archival research at College Park in Maryland, looking through State Department documents preserved on microfilm from the 1920s and 1930s. While consulting diplomatic records, I compared them to contemporary newspaper articles from that time period, seeing which topics Americans wanted to see or were being fed. The majority of the State Department documents I examined were diplomatic dispatches from the U.S. Ambassadors in Vienna. I found that a lot of the government's perceptions of Austria were related to fears of Austrian instability being caused by Nationalist, Socialist or Populist unrest.
The archival research has been an amazing learning experience. I know it will be helpful as I move into my graduate thesis project to be more familiar with researching in archives. Now, it's a question of refining my argument with the valuable assistance of faculty members in the History Department.

What has been your favorite history course?
I am a student of the University Honors program and I’ve enjoyed how each and every course from the program weaves together a complex portrait of World History, Philosophy, Political Science, Sociology and cross-cultural dialogues. I would probably say the third of the four colloquiums of the Honors program was my favorite because it contained readings in 17th-, 18th- and 19th-century Europe.