What Great Minds Can Do: Michael Novak 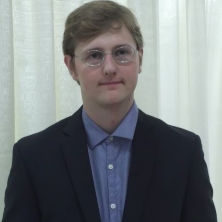 Michael Novak '19 graduated with a bachelor's degree in both History and Classical Studies and a minor in Medieval and Renaissance Studies. In addition to his academic workload, Michael was in the Slavic Club and ALLIES Club. He completed two summer internships, the first with the FBI and the second with the Office of Congressman Donald Payne Jr. in Newark. He is currently in the process of applying to graduate schools.

Could you describe your Honors Research project?
I researched outlaws in 14th century England, during the reigns of Edward II and Edward III. I've found that Robin Hood tends to be tame in comparison to others during this time – by the accounts, they were very violent individuals. During this period, there were a lot of complaints about outlaws, even noblemen acting outside the bounds of the law. There was a lot of evidence of rampant crime being committed by them. I was interested in finding out why these noblemen would commit violent crime, and what kinds of activities they were engaged in. I also wanted to examine why the crown was so incredibly ineffective at stopping these outlaws. Some of my research showed that the crown was unable to work with corrupt local law enforcement; other information showed that being noble involved a certain degree of criminality.

What motivated you to choose this topic for your project?
In my childhood, I was fascinated by the story of Robin Hood. This is an opportunity for me to study the real Robin Hood, or the real-life figures who inspired the character of Robin Hood. It's also a fascinating subject to research – there are accounts of outlaws committing extortion, robbery, arson and other things you wouldn't normally associate with the behavior of wealthy members of society.

Could you describe your research process?
It was harder to find primary sources than it is to find secondary sources that discuss the topic of these outlaws. There's been a good amount of research on these outlaws in the second half of the 20th century, so I had plenty of information to start this project. Finding sources for medieval history is difficult, because they take forever to be published. A lot of the sources aren't digitized, or they are in other languages and aren't available in translation. I did find some primary information in chronicles, which were narratives popular during this period. Medieval primary sources can take a long time to sift through; often, they end up being one quarter truth and three quarters rubbish. Dr. Wangerin was helpful because she provided me with a digitized copy of all of the Parliament rolls from this period. Considering Parliament was sometimes used to try legal cases, I researched if the names of known outlaws show up in Parliamentary complaints.