What Great Minds Can Do: Andrew Kerrigan 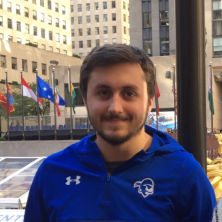 Andrew Kerrigan '19 majored in both History and Political Science and is currently part of Seton Hall's dual-degree program which gives students the ability to obtain both a B.A. and M.A. in five years. He also participated in the Honors Program and played for the Club Soccer team here at Seton Hall. Andrew has completed two internships, one with his state Representative and another with his Congressman. He is looking forward to possibly working in politics or in a government agency after graduation. He's also a huge film buff and is using his senior honors project as an opportunity to bring together his interests in a study of Cold War Film.

Could you describe your senior Honors project?
My project focuses on popular film during the Cold War. I'm interested in the ways film evolved during this period, especially in the ways it portrays war. I looked at not just the ground wars in Korea and Vietnam, but also the depictions of nuclear war in American culture. I found that over time, filmmakers were more willing to discuss the controversial topics and the realities of the Cold War. For example, right after the atomic bomb was dropped in Japan, it was almost a taboo subject for filmmakers. They addressed nuclear fears indirectly through science fiction films like in "The Day the Earth Stood Still" which serves as an allegory for the threat of nuclear war between the United States and the Soviet Union. After the Cuban Missile Crisis filmmakers started to address it more directly, like in "Dr. Strangelove" and "Fail-Safe." But then it once again became more of a taboo subject at the start of the Vietnam War as post-apocalyptic films became a new way for filmmakers to address it indirectly. For example, in movies like "Planet of the Apes," the film references some past nuclear war. It's interesting to trace the evolution of nuclear concerns through an aspect of popular culture.

What kinds of sources did you find during your research?
I read analysis of films during this period and used that to highlight the most important films of the time. As far as primary research, I looked at public opinions and reviews of film critics that are reacting to the movies when they debuted. I also watched the films on my own, using what I've learned about this period through classes to draw my own conclusions. It's mostly a process of finding films that were singled out as impactful. In order to trace the evolution, it's important to take into account how people felt about the controversial topics these films were addressing. Sometimes these films weren't as popular at the time. For instance, "Dr. Strangelove" is adored by critics now, but when it came out the reaction of critics was more hesitant to the idea of making light of a controversial issue. This relationship between the Cold War and audiences continued into later films as well. For example, movies like "Rocky IV" and "Rambo II" played on the idea of American patriotism and created a sense of retroactive victories over communism. At the same time, that doesn't mean that films were completely ignorant to political issues following the Vietnam War as the 1980s included films like "Platoon" and "Full Metal Jacket," which tackled the morality of the Vietnam War head on and really examined America's role.

Was anything about your research surprising?
Definitely. The Korean War was a part of the Cold War that I didn't even really think about discussing when I started. It's been referred to as the Forgotten War because Vietnam was so influential later on. Even in Hollywood that is the case. There were films coming out during the war that depicted it in a realistic and genuine way, but when the war ended inconclusively for America, it became a topic that filmmakers were hesitant to address. Many were resistant to portrayals of the Korean War because it couldn't show a clear American victory, as popular World War II movies were able to do. A lot of World War II films were also able to possess a simple good versus evil dynamic. Addressing Korea, and especially Vietnam, was a lot more complicated.

What has been your favorite history course so far? Favorite non-history course?
I really enjoyed Dr. Fieldston's "History of New York City" because it was fascinating to see how history affected one specific location, especially one so close to home. As far as a non-history course, I've loved my political science courses. In a course about U.S. Foreign Policy, I got to see how history and political science really affect each other. The Cold War is a perfect joining of my two interests, because foreign policy was such an integral part of the history of that period.