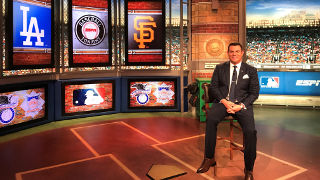 It was at the age of three during a family gathering that John Brickley '06 discovered his passion. Brickley became the center of attention as he repeated the phrase, "over to you," to his uncle while holding a candle stick as a microphone pretending to be a sports announcer. Brickley and his family knew then that he had a future as a sports anchor; today Brickley is living that very dream as a host and commentator for ESPN.

The Connecticut native grew up in West Hartford where his love for sports started to develop. After graduating from Northwest Catholic High School, Brickley knew he wanted to study broadcasting to develop the necessary skills to follow his dream of becoming a sports anchor.

Although Brickley knew New York was the place to be for a successful future in this career, he wasn't ready to take over the big city yet. Brickley believed the perfect school for him was one small enough where he would feel at home but that also offered big opportunities. Seton Hall was this place and South Orange became home. He recounted, "this school gave me the lifestyle of a small town with access to the 'busyness' of New York City within a 30 minute train ride." During his years at Seton Hall, Brickley took advantage of all the opportunities the University had to offer him, he learned the craft of broadcasting in the classroom and applied it to his internships in New York.

Proud of many accomplishments during his years at Seton Hall, he especially boasts about being the announcer that called Seton Hall's big game vs. Wichita State in the NCAA Tournament in 2006, "It was one of the most amazing experiences to be able to call the game." Another proud college moment was, while interning for WCBS he had the opportunity to interview Shaquille O'Neal, former NBA player, "To have the opportunity to interview a sports legend like him was a dream," Brickley said of the experience.

Brickley considers Seton Hall the best decision that he has made in his life, adding, "This school gave me a better advantage when I graduated, all the relationships I built with alumni, students and instructors have been a tremendous help in my career. I felt I was ahead in the industry." Like most college grads, Brickley did not have his dream job right after graduating; he started his career as an anchor in smaller markets in Connecticut and Pennsylvania until he worked his way up trying to make a name for himself and learning where his talent was.

Today, Brickley calls himself the "ESPN-Jack-of-All-Trades." He began working at ESPN five years after he graduated in 2006 and currently serves as studio host for ESPN Radio, covering NBA, NFL and MLB, he is a play-by-play announcer for college basketball, football, lacrosse and boxing, and a studio host for Baseball Tonight, NBA Countdown, College Football Live and SportsCenter All-Night. During his time at ESPN Brickley has had the opportunity to work alongside with Marc Kestecher who he considers a role model and mentor, "Kestecher has been a champion of my success and being able to bounce ideas off him and pick up his brain has been a privilege," Brickley also added that he owes a great deal of his success to his parents who kept him grounded and true to his morals and values. In Brickley's experience, figures like Kestecher and his dad are a key component to success in broadcasting, "You need to know your talent, passion and someone who has confidence in you."

As an alumnus, Brickley remains involved with Seton Hall through his volunteer work as a mentor with WSOU. Alongside the WSOU Alumni Association, Brickley founded the John Conway Scholarship that is given to a Broadcasting student every year. His advice to all that are studying at Seton Hall is to enjoy college as much as possible always keeping in mind their goals, "You want to be well rounded, balanced but also build a foundation to your career path by the time you get out of college."

John Brickley is one of 100 alumni profiles Seton Hall Alumni Relations will feature this year in celebration of reaching an alumni network of 100,000. To read more about  what great minds can do at Seton Hall, visit here.