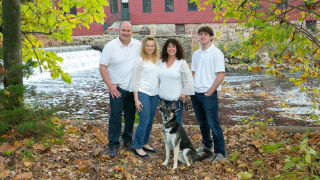 When it comes to keeping it all in the family, Seton Hall shares its own traditions by honoring legacy families. Legacy families consist of students and alumni whose family members – including parents, grandparents, and/or siblings – attended or currently attend Seton Hall University, and that holds true for the McNamara family.

Robert Sr. and Anne Marie met at the University and were married in '99. When asked what kept their family coming back to Seton Hall, Robert Sr. shared, "Seton Hall offers opportunities to have programs and various studies in small and inclusive environments." Additionally, he noted that "from the first day you start you just feel like family."

They both also acknowledged how important the Catholic tradition and mission of Seton Hall is to them and their family. "The Catholic tradition here is something I'm very proud of," said Robert Sr. who spoke very highly about many of the fathers at the University that he was taught and guided by. He explained, "They gave me a unique perspective of understanding, and helped me to be more aware of who I am as a person and how I fit into this world."

The couple went on to share more about their time at Seton Hall and some of their most memorable moments. Anne Marie, who was the first female in her family to attend college spoke about a pivotal turning point in her career. Towards the end of her master's program in education leadership, she took a two-week-long comprehensive exam instead of writing a thesis. "I remember a moment when all of my professors called me into a room. I thought I hadn't done so well," she said. "They announced I was the first person in the history of the program to earn a perfect score and invited me to be a part of the doctorate program." Anne Marie shared that at the time, "they really saw something in me that I didn't see in myself."

Robert Sr. recognized his former professors saying, "they really took the time to know me as an individual. Specifically speaking of the late Rev. Richard Nardone, Ph.D. '50 Robert shared, "he had a unique teaching style, and really challenged you to think beyond."

The two Seton Hall sweethearts now have two children to carry on their legacy. Their daughter, Mary Grace McNamara, is a junior with a triple major in History, English, and Secondary Education, and their son, Robert McNamara Jr., is a freshman. Although Robert Jr. is currently undecided in his major, he is leaning towards business administration like his father and many of his uncles. Both children remember being introduced to Seton Hall at a very young age. While just a baby, Mary Grace tagged along to her mother's doctorate dissertation advising meetings on campus. "I remember one day standing by the St. Thomas and St. Patrick statues on campus and asking them about their day," she said. Robert Jr. told of being donned in Seton Hall gear as soon as he was born, and now is the 11th person in his family to attend the University.

It is no question that the McNamara name is one that runs deep into the Seton Hall community and has done so for many years, dating back to 1989. Anne Marie noted that between her and her husband, and their brothers and sisters, nine adults from their family attended the university, and now her children are the two most recent. Of the nine adults, the family shares thirteen degrees so far. Six of the family members were also married in the chapel and are still married to this day.

Amidst the conversations about favorite professors and words of encouragement to Robert Jr. for his first year, Anne Marie and Robert Sr. shared what they were looking forward to as legacy parents. Anne Marie said, "I am hoping they find their best friends, and maybe their future spouses. As an educator, I hope they both find their niche and are able to give back into society and their fields to continue the tradition of servant leadership." Robert Sr. noted, "I have hopes that what I experienced holds true for them today." Of Mary Grace, he said, "I have seen tremendous growth in her as a person and a friend to her friends, and that's been molded by Seton Hall. I am very proud to see that and wish the same for my son."