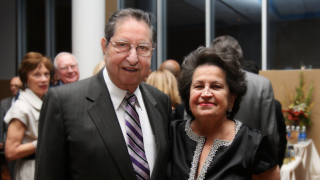 For Carmen Ana Unanue, servant leadership didn't just find its way into her work and career; it was the way she lived her life. Along with her husband, Joseph A. Unanue, Mrs. Unanue was devoted to personally serving and uplifting the Latino community until her passing on September 26, 2021. Her deep commitment and passion for her family, church, community, and others were shown through her dedicated work and philanthropic efforts over many years.

Coming from Puerto Rico, Mrs. Unanue knew what it was like to be different. She valued prioritizing others in need and that impact was felt by those who knew her. Her journey with Seton Hall began in 1984 when the University awarded Mrs. Unanue an honorary Doctorate of Humanitarian Service. In 2005, Joseph and Carmen Unanue provided a generous donation to Seton Hall, giving life to the Joseph A. Unanue Latino Institute. In that same year, Mrs. Unanue was honored by the American Bible Society for her contribution and leadership to the Hispanic community.

The Latino Institute at Seton Hall exists to empower Latino students. A center of excellence on campus, the Institute shines a light on Latino culture, bridges gaps in understanding about Latino heritage, and provides opportunities for Latino students to grow as compassionate servant leaders and achieve a rewarding education. The significance of the Institute and its impact continue to stretch across the Seton Hall University campus and beyond into the community.

Program Coordinator for the Institute, Gabriela N. Fernandez Velez, says, "Mrs. Unanue was passionate about the Institute, and often referred to the scholars with love as 'the kids.' The presence of the Latino Institute will continue forward on campus, serving as a community to its scholars in the memory of Joseph and Carmen A. Unanue." The Carmen and Joseph Unanue Family Foundation helps fund the Institute, the Latin America/Latino Studies Program at Seton Hall, and two annual scholarships for both undergraduate students and graduate MPA students who exemplify outstanding achievements and service.

Mrs. Unanue spent time teaching Spanish and Religious Education at St. Joseph's Roman Catholic School in Bogota, New Jersey, and at the Academy of St. Therese of Lisieux in Cresskill, New Jersey. Involved in many charitable organizations, she served as an executive board member and former president of El Museo del Barrio in New York City. In 2006, she was named to the board of directors of The Resource Foundation, which helps the disadvantaged throughout Latin America. Further, she spent several years on the Board of Trustees of WNET, Channel 13 in New York City. She served on the Overseers Seminary Committee at Immaculate Conception Seminary on the campus of Seton Hall, and on the board of the Don Bosco Executive Development Council of Patterson, New Jersey.

Mrs. Unanue's faithful and lifelong service extended around the world, as well. She frequently traveled with her family to Honduras where she worked with residents in remote villages, helping supply potable water and building schools. In 1993, at the request of Pope John Paul II, she served on a ten-woman steering committee responsible for organizing the first Catholic Pro Familia in Puerto Rico. She went on to work with Papal Emissary, noted author, and close family friend, Monsignor Lorenzo Albacete, and was even honored by President Ronald Reagan for her community service.

Mrs. Unanue always championed others. Although she is no longer with us, her legacy lives on in her philanthropy, her example, and the impact of her charitable work on the Latino community and beyond.